The Cost of Firmware - A Scary Story!

Today is Halloween. Perhaps it's appropriate, then, to comment on the horrifying and scary cost of firmware.

I've been collecting this data for some years, and my numbers peg the cost of firmware at $20 to $40 per line of code (LOC). That's not coding; this includes the entire life-cycle, from requirements elicitation to final delivery.

It's pretty astonishing to interview developers and hear about their code production rates. Typically they tell me they can crank 100 to 300 LOC/day. That may be true in the pure coding phase, but is simply not relevant. The real question is: what does it cost to build a product? That includes requirements, design, coding, debug, test, integration, documentation, and release. These are all real costs that must be accounted for. And that's what my $20-$40 numbers cover.

In a 1996 paper by Thomas Drake (Measuring Software Quality: A Case Study, IEEE Computer Nov, 1996) NSA (you know, those folks who are listening to you at this very minute) figures they pay $70/LOC.

VDC's 2017 Embedded Engineer Survey Results, once you boil down all of their data, suggests the number is about $43/LOC.

Toyota has the coveted "most expensive code every written" award. Their engine control code caused the Feds to hit them with a $1.2 billion fine, which works out to over $1200/LOC, even before one includes the actual engineering. 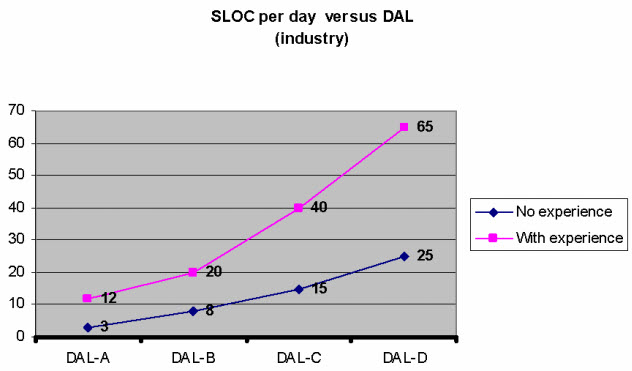 Now, that's just for documentation, production and validation - these figures do not include the other aspects of building a product. Still, it's instructive to play with the numbers. An experienced developer in the USA will cost around $200,000/year (including overhead). At 65 LOC/day that's $12/LOC, or probably twice that once all of the engineering activities are included.

At 12 LOC/day for great code, figure on five times the price.

Inexperienced developers are maybe 25% cheaper than old salts, but are only a bit more than a third as productive.

Now, their numbers assume one is working 40 hours per week on the code. An article in the May/June 2014 issue of Crosstalk claims the average developer is 50% utilized on the project at hand; other sources cite 55%. So the real costs are twice what they've cited.