Bill Schweber always writes fascinating columns. With the recent anniversary of Apollo 11 he wrote an excellent article about how the astronauts navigated to the moon.

Did you know they used, in addition to other techniques, celestial navigation? A sextant, one that looked nothing like a marine sextant, helped these high-tech navigators determined their position by observing the stars.

For hundreds of years sailors have found their position while at sea via celestial. Until John Harrison's invention of the chronometer they could only determine latitude. Sans time, longitude is difficult to figure (there is an obscure method called lunar distances which few sailors mastered).

The idea is very simple, though implementation more complex. Suppose we could stop the Earth from rotating. Now observe the angle between the horizon and a celestial body, like the sun, moon, stars or planets. You're standing on an enormous circle; anyone on that circle would get the same angle. Walk closer where the body hovers over the Earth and the angle increases, strolling backwards decreases it. Now observe another body: where the two circles intersect is where you are (yes, they'll generally intersect at two places, but these rings are enormous; presumably you know which ocean you're in.

The circles' very vastness means that in your neighborhood you can approximate it as a straight line, which is called a "line of position," or LOP. Where the two (or more) LOPs intersect is your location.

It's inconvenient to stop the Earth's rotation; just advance the first LOP to the second knowing how fast and in which direction the ship is moving between observations.

Many other corrections are needed. The sextant will have some errors. Varying atmospheric pressure and temperature refracts the light from the body. Observe a body low on the horizon and the refraction is greater than if high as the image travels through a thicker atmosphere.

These calculations require ephemeris data: you need to know where the body in terms of celestial latitude (called "declination") and longitude ("hour angle" to navigators, or "right ascension" to astronomers). Every year there's a new Nautical Almanac issued, which is a book listing the position of all useful navigational bodies every hour of the year. These include the sun, moon, bright planets, and 57 stars (the data for the stars would be so vast they are given for every three days relative to a fictional point in the sky; that point's position is given for every hour). Interpolation tables help the navigator pin down their location to the second. For a four-second error puts you off by as much as a mile.

At sea, especially on a small boat which is being tossed around, you don't want to do a lot of spherical trig, so another book gives every solution to the "navigational triangle," which is formed by the closest pole (north or south), the boat's position, and the celestial body's declination and hour angle. These tables, too, require interpolation. 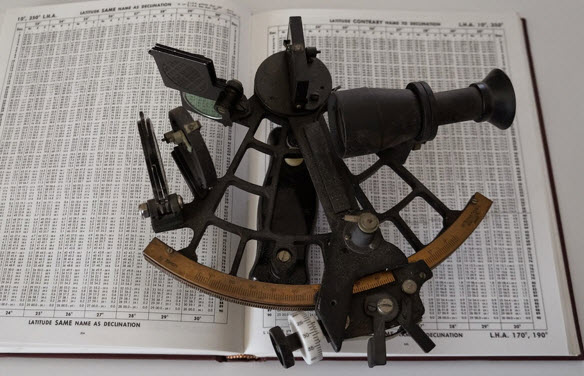 My sextant on the tables of solutions to the navigational triangle.

Finally, the sailor plots the LOPs on a chart. Now, at sea the distances are vast; the chart of the Northern North Atlantic covers thousands of miles. A pencil lead's width would prohibit getting an accurate position, so the navigator constructs mini-charts every few days on standard plotting sheets. The final position gets transferred to the big chart, traditionally at noon. 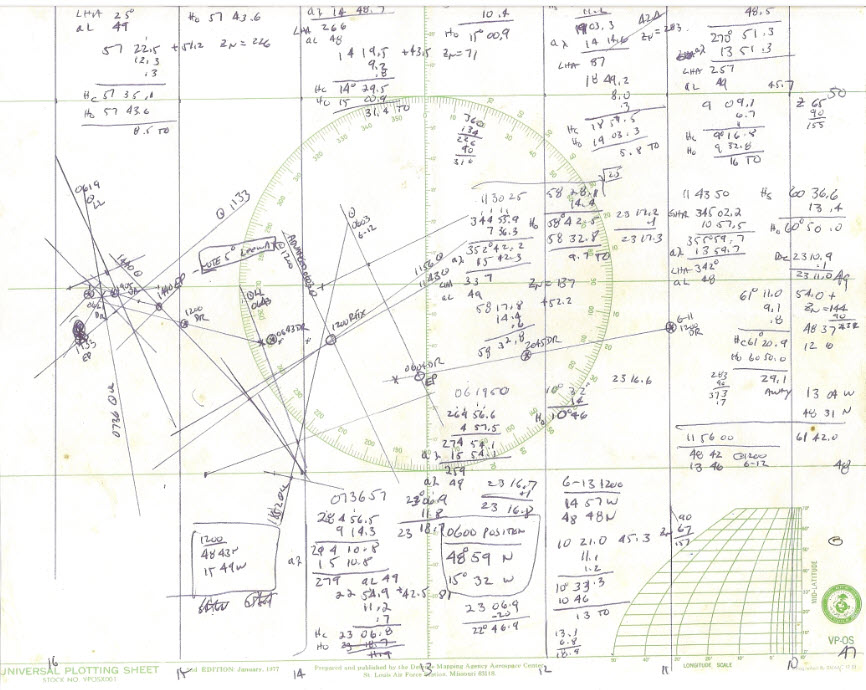 A plotting sheet for a few days on one of my Atlantic crossings on a 35-foot boat. The position is pretty far north and about 320 nautical miles west of Ireland.

In the real world celestial alone just isn't enough. Clouds can obscure the sky for days. So one is also plotting the dead reckoning position: your best estimate of where you've been over the last 24 hours based on the vessel's speed and course, factoring in current, if you know it, and leeway from the wind (which is an educated guess).

GPS will get you within meters. What about celestial? With practice a good navigator can get pretty close. At sea I can count on about two-mile accuracy in reasonable weather; when it's very rough that error balloons by two or three times.

Celestial is obsolete and practiced by only by the grizzled curmudgeons of the sea. On our sailboat we use GPS. But I always take some sextant sights, to stay in practice, and because it's fun. How cool to determine position using such old methods!