How Projects Get Out of Control

Think requirements churn is only for software? Think again.

Software requirements factoids, from Jones, The Economics of Software Quality

We have a 32' sailboat, a ketch (which basically means there are two masts). Voyager was built in 1977 as a tough vessel that could survive the worst conditions. She's an Allied Seawind II; there's a Seawind association whose website is here. We've taken multiple voyages in her to Bermuda, New England, the Caribbean, Bahamas, and Turks & Caicos.


Over the years we've upgraded most of her systems. But one pesky problem kept getting worse: the engine. The Westerbeke 30 diesel had 1000 hours of running time in 1998 when I bought her, but after uncounted miles over the last two decades the clock now reads 4500.

Three years ago the engine died. I was sidetracked by building a new barn after the old one was destroyed by a neighbor's tree, but this year pledged to get the thing going again. Rebuilt injection pump. Total reroute of all fuel lines and filters. New injectors. New lift pump.

But I realized that that lump of iron was really a black hole that would forever consume resources and my patience. Should I spend however many of my remaining good years wielding wrenches or going sailing?

We were in Newport, RI in September for a wedding and had a free day, so went to the Newport boat show. Beta Marine was offering a 20% show discount on their engines. I had my eyes on a 30 HP Beta and had been desultorily talking to them for two years. Stan, the president, and I chatted at the show, and he convinced me to downgrade to the smaller and cheaper 25 HP model. The ever-supportive Marybeth gave her go-ahead, so I plunked down a $3000 deposit.

The scope of the project was clear: Replace the old engine with the new. Over the course of a week I removed the miserable rat's nest of wiring and plumbing from the Westerbeke and extracted the 550-pound beast into the main cabin using a chain hoist and numerous colorful adjectives. The boatyard's crane extracted it from the cabin and plopped it in my truck. 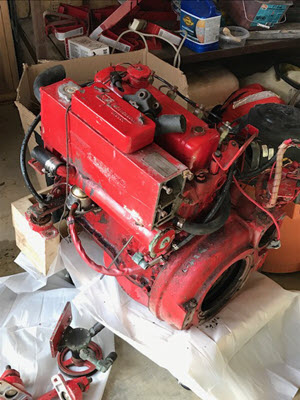 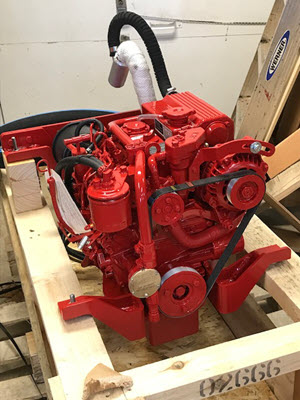 A big project! But, pondering this more, I realized that since we need a new prop shaft to fit the smaller Beta, I should also replace the cutless bearing and stuffing box (these let the shaft penetrate the hull without leaking… much).  Oh, with the boat out of the water I better also rebuild a couple of valves. And the Beta's exhaust isn't compatible with the Westerbeke's, so that has to go. With the engine out we could install a water heater, too.

Some more requirements churn: with the engine out there's great access to the tons of wiring in the engine compartment. Decades of modifications and changes by many owners, some with limited electrical skills, has made this a total mess. I added a complete rewiring of that area to the list.

But the main electrical switch panel is a catastrophe. Some of the breakers don't work and replacements are not obtainable anymore. The wiring behind that panel is, well, just too embarrassing to get into. Now we have another, major, new requirement: Replace that panel. I could buy a standard panel from Blue Seas, but all of those are an imperfect fit to Voyager's needs. As an engineer I want a perfect solution (a goal that has destroyed many schedules and projects). Another few days went into designing the perfect panel, which was manufactured by Front Panel Express. Another upside: loaded with circuit breakers it is a third the cost of one from Blue Seas.That panel was then mounted in bit of plywood with meters and guages. And wouldn't it be nice to be able to charge phones and the like? A smaller panel joined the fray with two USB ports and a linear regulator to reduce the +12 to +5. 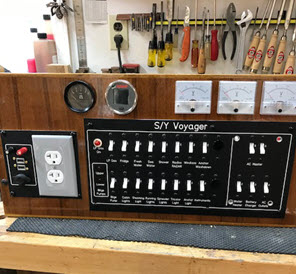 The new panel in my shop.

Since we're doing all this work, Marybeth decided this would be a good time to upgrade the varnish, which is her domain. (At the boat show Jamestown Distributors convinced us to try a new brand which promised much easier application. It was a bust, and she has returned to Epiphanes, her old standby. Now she plans to strip the experimental varnish, adding weeks to her work.)

The result of this requirements churn is a more expensive project. The schedule, originally estimated at one month of being on land, is now, well, who knows? It looks like we'll be ashore till April. Or May. Maybe June.

If I were my boss I'd fire myself for doing such a poor initial job at eliciting the requirements. But this is playtime, not work. I'm excited about both doing the refit, and at using the boat come Spring. And it's fun to give the metaphorical "boss" the metaphorical finger!

But I sure hope that the requirements are now settled.