First Man by James Hansen, is an excellent book. It's the only authorized biography of Neil Armstrong, who, in my opinion, is one of the great American heroes. He was a test pilot, for sure, but also an excellent engineer who eventually left NASA and taught engineering at the University of Cincinnati.

First Man, the movie, is (all opinions in this post are mine alone) is an abject failure.

The story is a familiar one, told and retold in many movies and books. Armstrong, a decorated fighter pilot, and later civilian test pilot, flew over 200 types of aircraft, many at Edwards. In seven X-15 flights he expanded the envelope of knowledge about rocket-powered aircraft. Yet the movie opens with only one episode, when his X-15 ballooned off the atmosphere. He did land successfully. Armstrong is cited as having had three "incidents," (in fact, not all his fault) while at the air base; his hundreds of other missions aren't mentioned.

In that X-15 "incident," Armstrong is being shaken nearly to pieces even pre-launch, while hanging on the wing of the mothership B-29. In fact, every time he climbs into an aircraft or space vehicle the film shows him bouncing around in a way no human could reasonably survive. The director's very zeitgeist is bouncy, shaky, scenes. He often employs a hand-held camera, which seems to be operated by a cameraperson with acute Parkinson's disease. I find this technique very distracting.

Armstrong's young daughter dies of cancer early in the movie. She appears from time to time as a ghostly presence, and is the only really unifying theme. I'm sure her loss devastated Neil and his wife Janet, but doubt that a man of such ambition and drive spent the next decade unable to achieve any sort of happiness.

And Armstrong is depicted as a deeply unhappy man, morose and emotionally stunted. When he bails out of the lunar landing training vehicle, dragged by his parachute through a field, the movie shows his face looking like raw hamburger. In what can only be described as a caricature of his reputation as a cool pilot he won't even talk to his wife about the incident even though she is aghast at the injuries. (In real life he merely bit his tongue.) 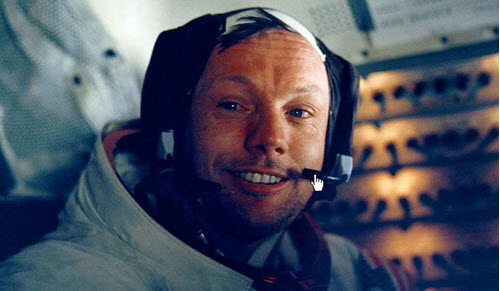 There's no sense he enjoyed his adventures or NASA career. Yet there are so many pictures of his broad smile that I just can't believe this image.  He was known as being taciturn, but in the movie he appears barely able to speak. Post-NASA he served on many boards and commissions, often as chair. Clearly he was able to state his opinions forcefully enough to be effective in these positions.

Neil and Janet did divorce. But not till 1994, 25 years after Apollo 11. Was the marriage in tatters for that quarter century? I don't know, but the yelling (on Janet's part; Neil is shown as a Bad Husband who stoically absorbs the verbal blows) suggests much discord. The final scene is Neil in quarantine after the flight and Janet on the other side of the glass, the two hostilely glaring at each other. They eventually manage to touch the glass, but not at the same time. The lack of physical contact, even if insulated by that barrier, is palpable. True? I'd think a young couple would show some joy at being reunited after a such a historic event.

Then there's the music. As the LM is on its way to the lunar surface the score ratchets up. But it sounds like a dirge. The message is that things are bad, they'll probably crash, and the whole mission will be a disaster.

Factually, the movie gets some things wrong. That quarantine facility seems populated by just the three astronauts, when we know it was relatively crowded. Did the LM almost crash in an enormous crater, requiring Neil to fly (shaking like mad) to a distant spot? No, actually, he was avoiding boulders. The 1201 and 1202 alarms generated by the computer came in the last few minutes before landing, not right after the deorbit burn. He wasn't the improbable cool customer shown; in reality his heart rate hit 150 BPM.

And, no, he didn't leave his daughter's bracelet on the moon. If Karen's cancer is the movie's central premise, as it seems, this manufactured episode, with Neil shedding tears behind his faceplate, gives lie to the whole effort.

Finally, some of the scenes are painfully overlong.

I'm a sucker for any book or movie about the space program, but First Man was a great disappointment. If you're expecting to revel in the technology, science or even sense of adventure, you'll be disappointed.

Read First Man, the book. That shows the Neil Armstrong as we have learned to know him.