I received a lengthy email from an engineer this morning about poor customer support from Analog Devices. This surprised me, as Analog is one of the great semi vendors. They have the to-die-for URL analog.com.

For 50 years the company has published Analog Dialog, a now-emailed newsletter containing product information and design ideas. It's one of the few vendor publications I read in its entirety as the products are usually fascinating and the technical bits enlightening.

Over the years Analog and Linear Technology have been my go-to places for analog components. Yes, a lot of other vendors also offer great products in this area. But these two seem to fill most of my analog needs. Now of course, they are one company.

I started using Analog's parts in 1970 while working as an electronics technician while in high school. Neotec, the company I worked for, had a somewhat schizophrenic personality. Founded in 1966 to do space work, by 1970 the space program was in tatters so, while we did as much NASA business as possible, we were increasingly drawn into commercial products.

Neotec was a disaster of a company. Always underfunded, always battling creditors, when we tried to go public I overheard one auditor wearily stating "I've seen every trick this company has pulled before. But never all by one outfit." The late Bob Rosenthal, the president, was my business mentor and friend. He told me that for 69 straight weeks on the Thursday before payday Friday they didn't have the money for payroll, but by shenanigans, luck and perhaps divine intervention the checks cleared. Can you imagine the stress management faced?

Those early commercial products included colorimeters. Microprocessors didn't exist; these were entirely analog, using plenty of Analog Devices components. In 1971 the company had me design a board that computed the square root of the sum of the squares of the three color channels. Square root? In analog? Well, the Shotkley Diode Equation came to mind; the exponential relationship between voltage and current through a PN junction meant putting a transistor in the feedback loop of an op amp could to a log, and log-1(.5 log(x)) is the square root. That board was covered in Analog Devices 40J op amps. Why 40Js? We used them like popcorn in other products. 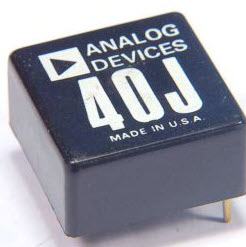 40Js were awful parts, but in 1971 expectations were a lot lower than today. Each amplifier needed gain and offset trimpots. In fact, all of the products we made were soaked in trimpots, and we techs were forever calibrating these things.

The 40J was a single op amp in about an inch-square epoxy-potted module, composed of some number of discrete transistors. They often failed. In '72 I was sent on a month-long trip around the world to repair our products and teach support to our representatives. In Belgium, I replaced 40Js. In France, the same. More in Italy. England soaked up the last of my 40J supply and the office sent more. Sydney saw my supply wane, Perth in Western Australia used more. Another depot was dispatched. Hong Kong, Kuala Lumpur, Jakarta ate away at my stash. Finally, on my last stop in Tokyo I had a few left over. I gifted them to our representative, saying "you're gonna need these!" I was sick of those miserable amplifiers and hoped to never see one again.

It was a relief to board the 747 home. My seat number?

And it was broken. It wouldn't recline.

Despite those travails we always had a good relationship with Analog, so I was surprised to hear about the support issues (and I have to assume this is an isolated case). But this theme keeps arising about many vendors today. While I understand it's tough to interact with every engineer about the insanely-complex parts today, taking care of the customer has always been a critical part of business. Yet too many vendors now dump support issues on their own customers via "support" forums and chatrooms. Others are notoriously tardy; I ran an experiment a couple of years ago and found some took over two weeks to reply to a simple emailed question. (Some responded in hours).

If you're building a smartphone that will mean orders for hundreds of millions of parts per year, you'll be treated extremely well. I know of one semi vendor that puts large teams of engineers into customer sites when volumes are this big. Buying a hundred $2 parts/year? Good luck getting any attention.

While I understand the economics, that's no way to build a loyal customer base.

Latest Embedded Muse: Replies to 'Is Assembly Dead' and 'on Taking Charge'.

Latest blog: Is a heart rate of 72,123 beats per minute possible?