An incredibly violent storm in 2014 brought a neighbor's red oak down onto our barn. This was the best thing that could have happened, as we had long planned to replace the building. It had a dirt floor, was in poor repair, leaked badly, and was generally spooky. 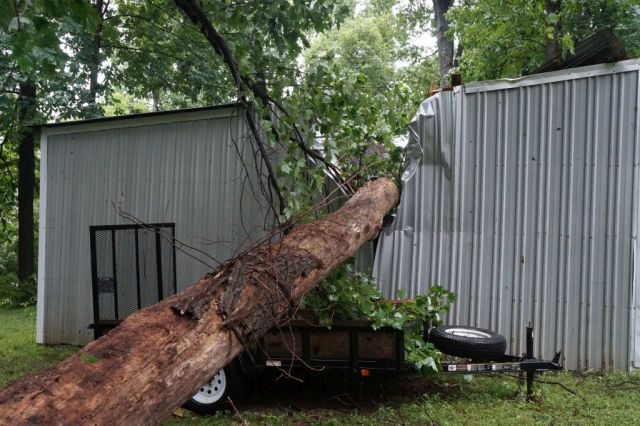 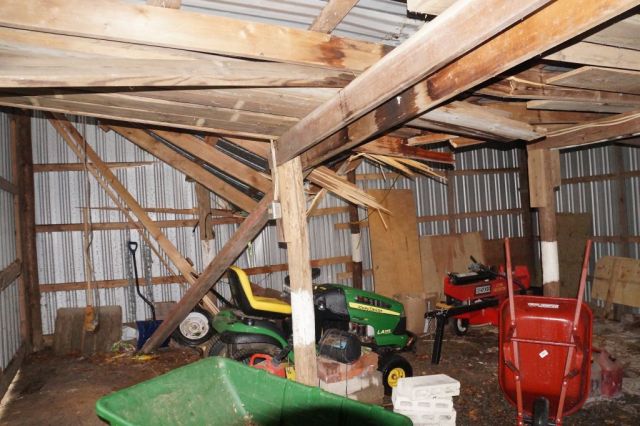 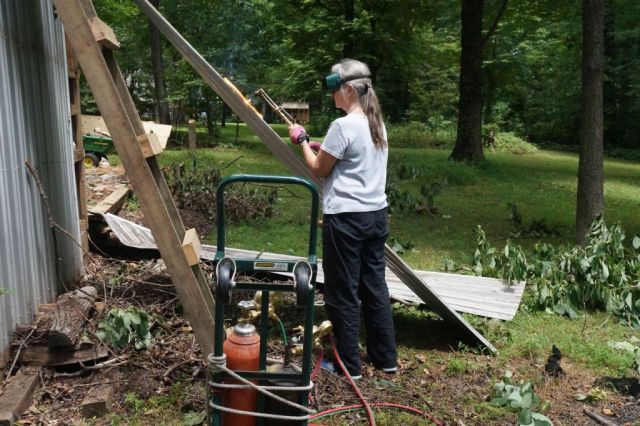 Much of the metal siding had to be cut. Here MB is cutting with our oxyacetylene torch. We eventually took the siding to a scrap recycler and got enough money for a couple of really nice bottles of booze. There were about 2000 pounds of steel. 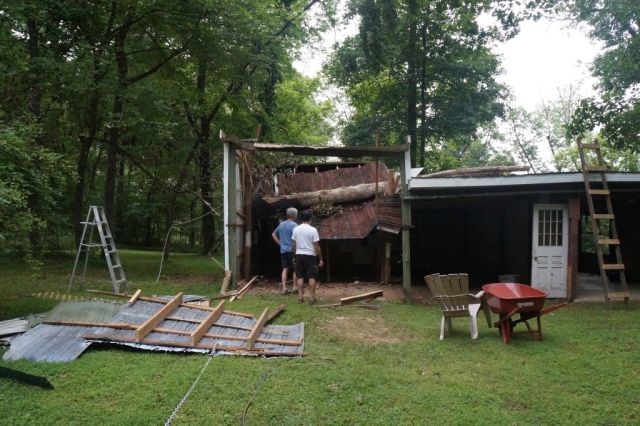 A chain to the hitch on our truck helped dismantle the building. Note the white door. In boatbuilding it's said that if you preserve just a part of a boat's keel when rebuilding, it's still the original boat. That door will go inside the new barn so will be the "keel" of the new/old building. 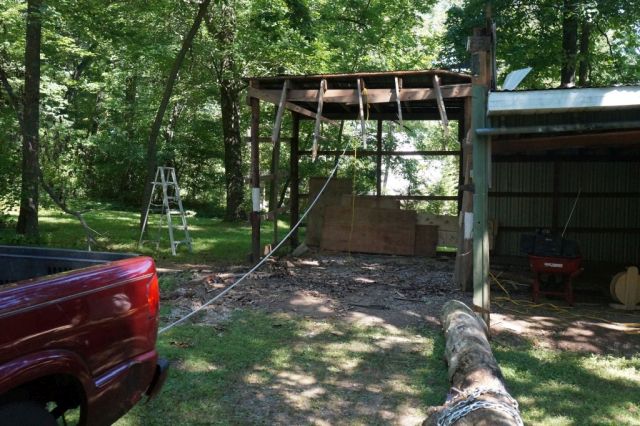 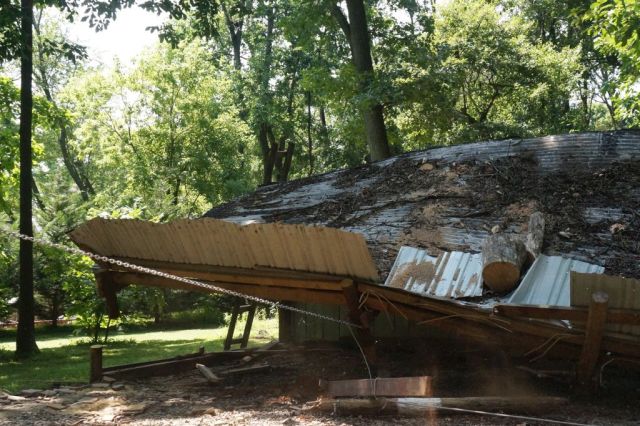 Burn marks on the roof. Turns out there were a lot of dried leaves up there which caught fire while I was cutting with the torch. The garden hose was just barely long enough to get a stream of water on the conflagration. 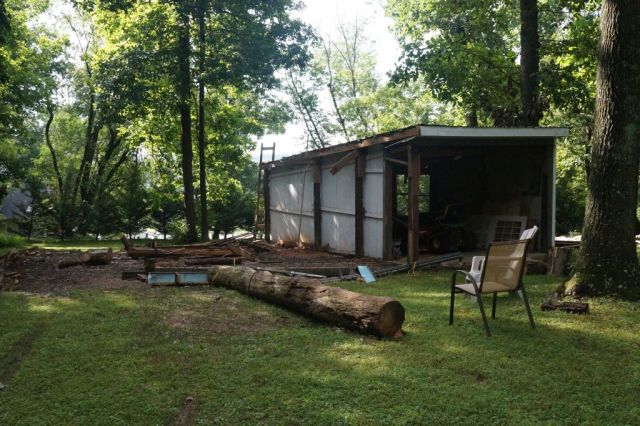 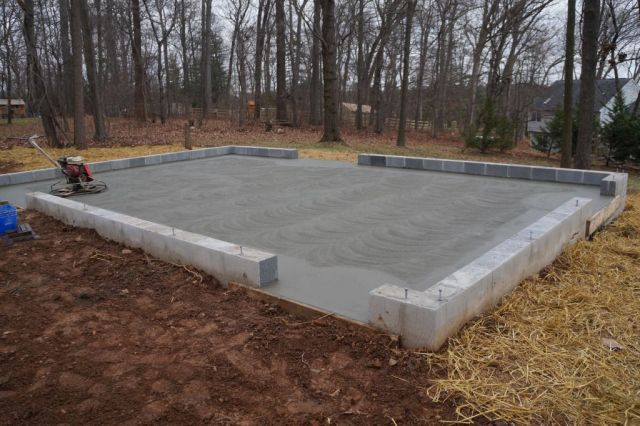 We paid an outfit to install a foundation. Alas, I was in Malaysia and missed this part of the construction. I designed the new barn but know nothing about foundations, so we hired an architect to design that. This picture is the foundation in December, 2014. The foundation and a ditch from the house to the building (for the electrical cable) were done by contractors; Marybeth and I did all of the other work. 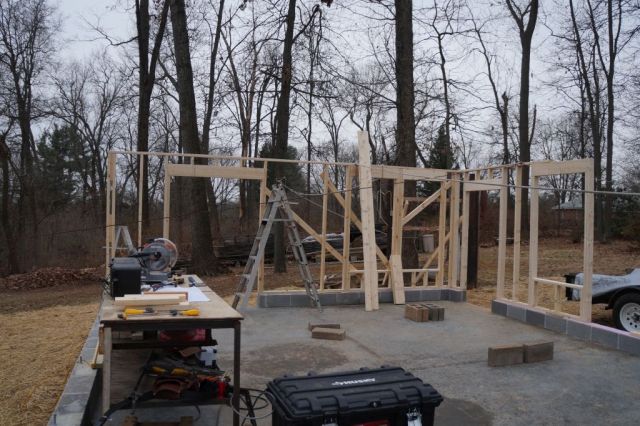 In early 2015 we started construction. 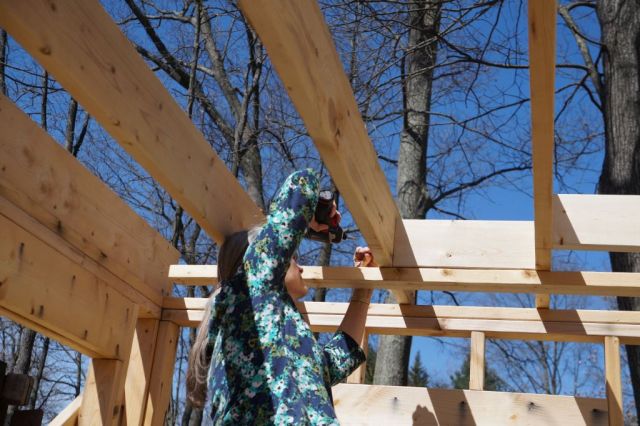 Here MB is using an impact driver to screw blocking into place. Nearly all of the fasteners are nails, mostly driven with nail guns (framing nailer, palm nailer and roofing nailer). There are about 12,000 nails in the building. 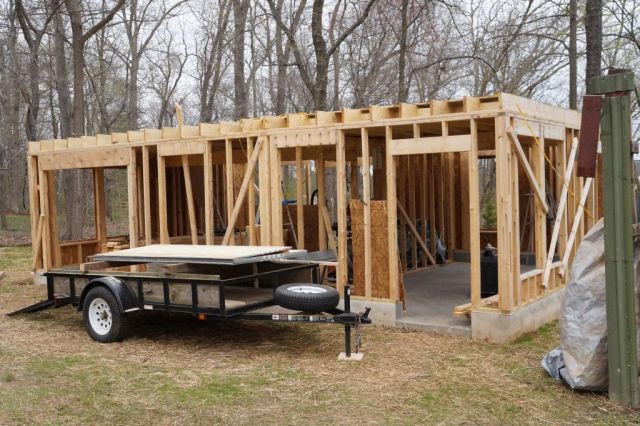 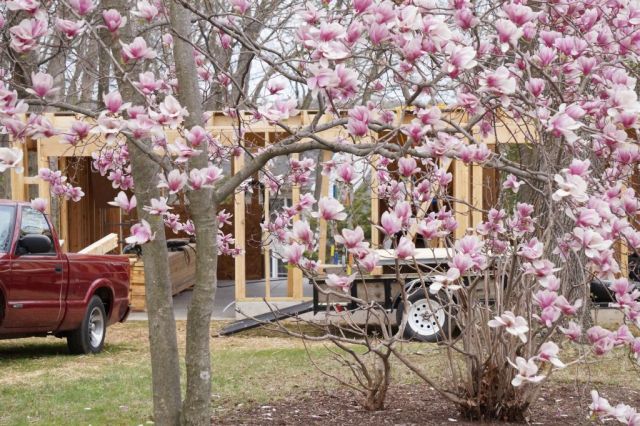 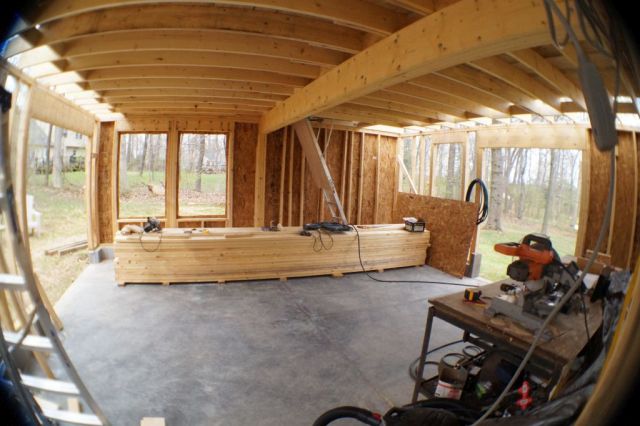 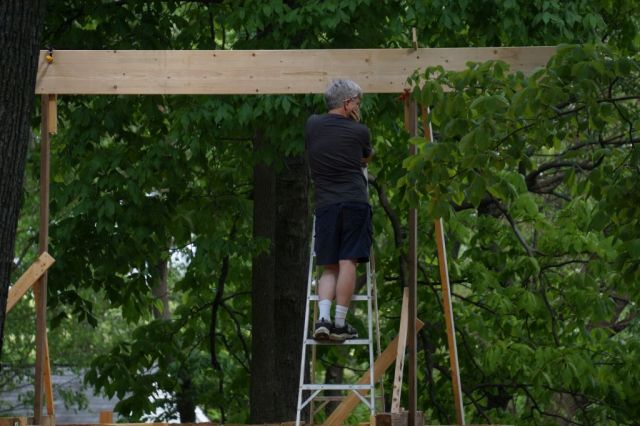 Ridge board in place. Darn, what's the next step? 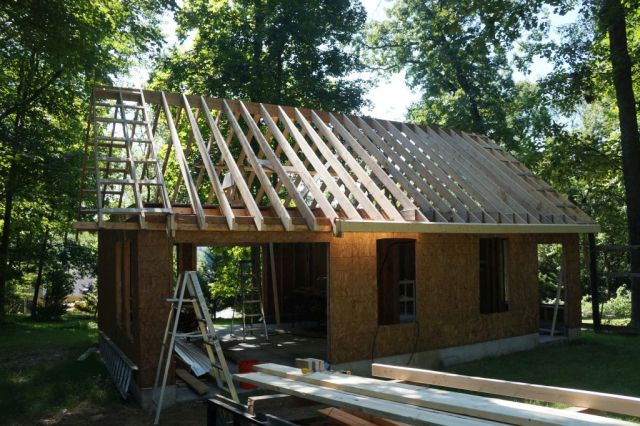 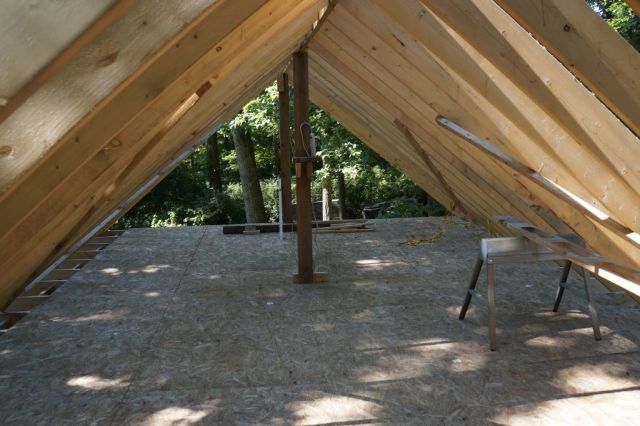 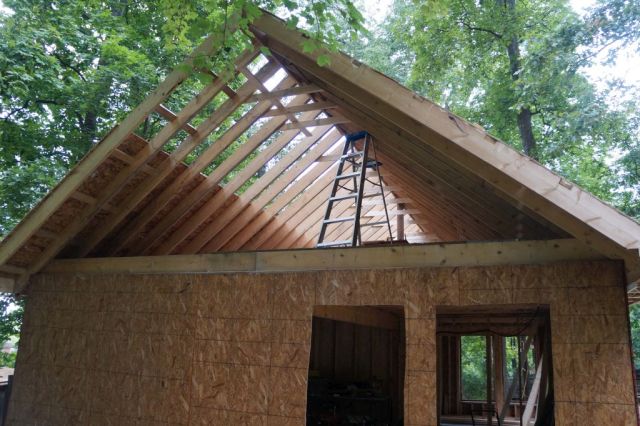 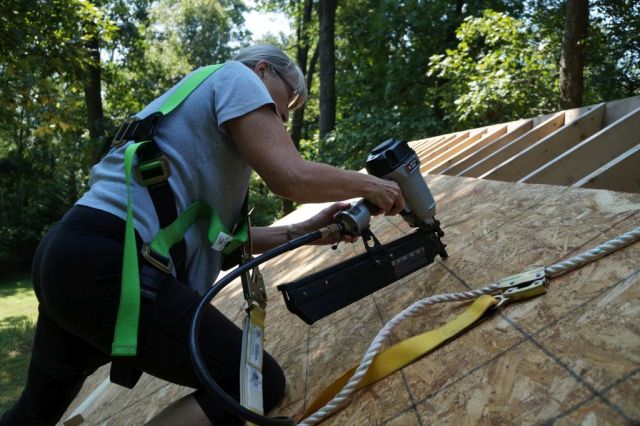 Nailing the roof sub-deck into place. We hauled each of these OSB sheets up using a block and tackle attached to the ridge board. The roof's pitch is 13/12, so is pretty steep. 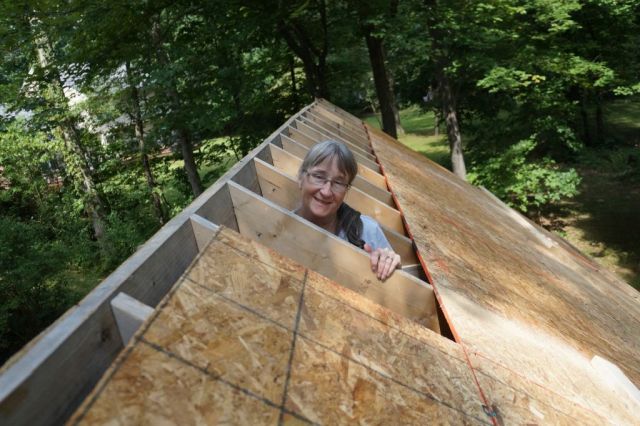 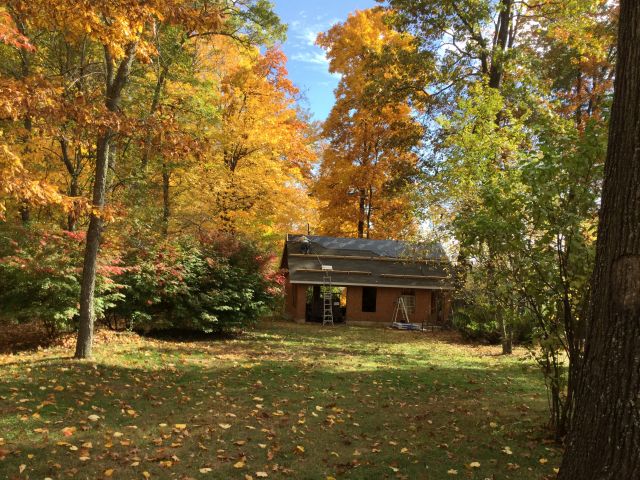 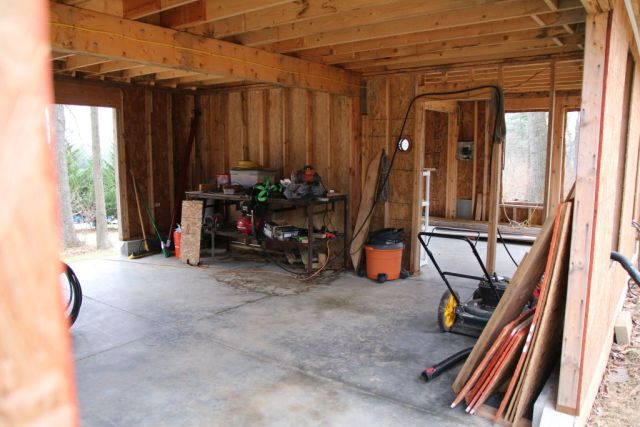 Note the porthole above the vacuum. This is from a marine consignment shop in Annapolis. 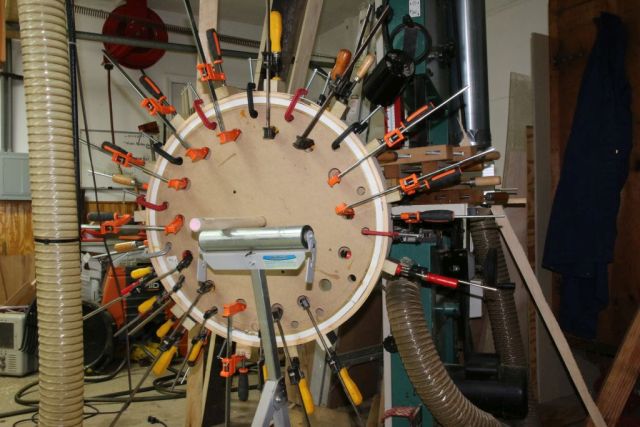 Marybeth made four round stained glass windows for the attic; I made round frames from steam-bent laminations. Here's one being glued up in my shop. The MDF is a form. 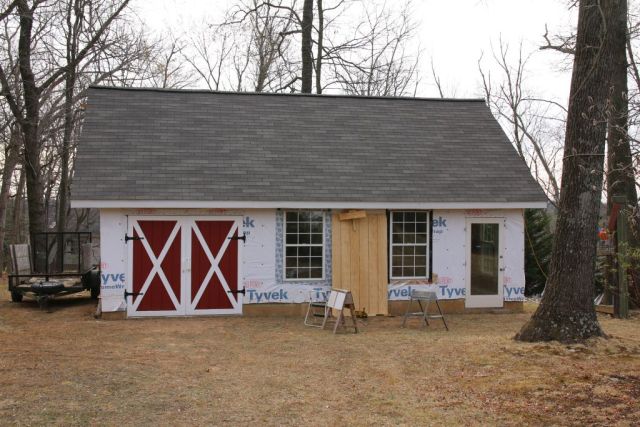 March, 2017. We made the barn doors, and here are just starting to put up siding. 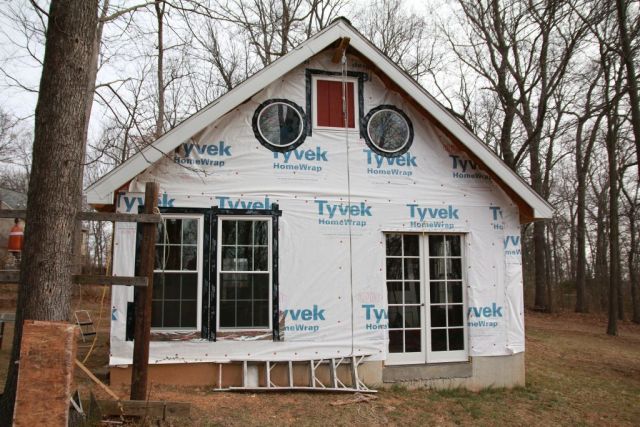 West wall. The French doors are one hundred years old. Note the round stained-glass windows, the attic door, and the winch post. Sometimes we put a light in the attic; the windows look spectacular when illuminated. 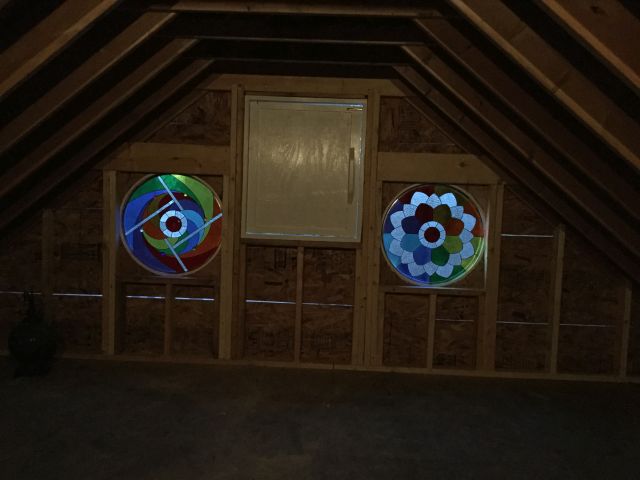 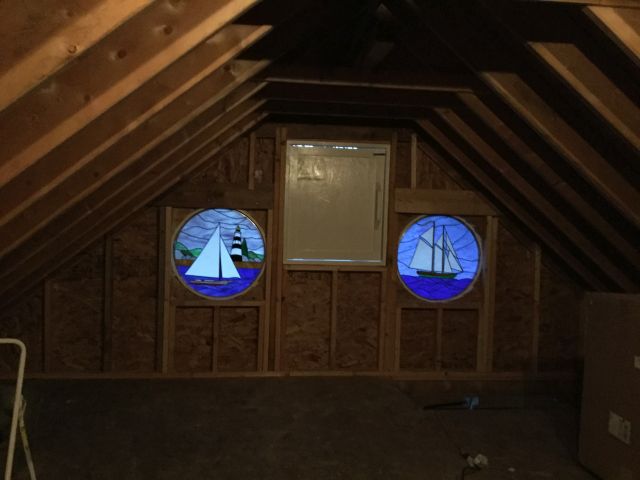 East wall attic windows. Marybeth is a well-known artist in Carroll County and does fantastic work. She also beads and makes mosaics.

July, 2017. The project is now complete and we passed the final inspection. 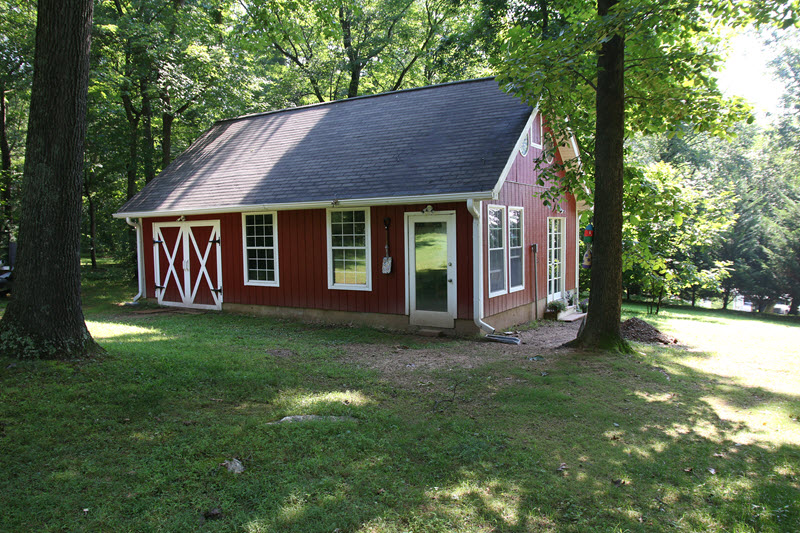 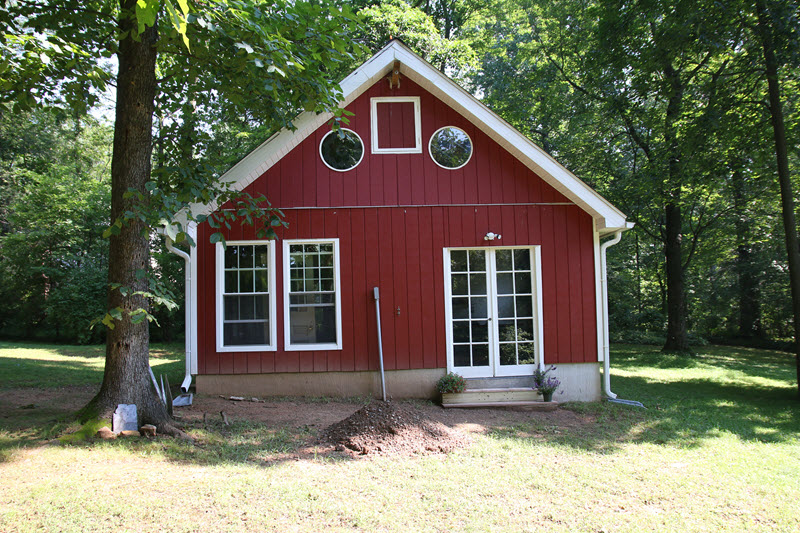 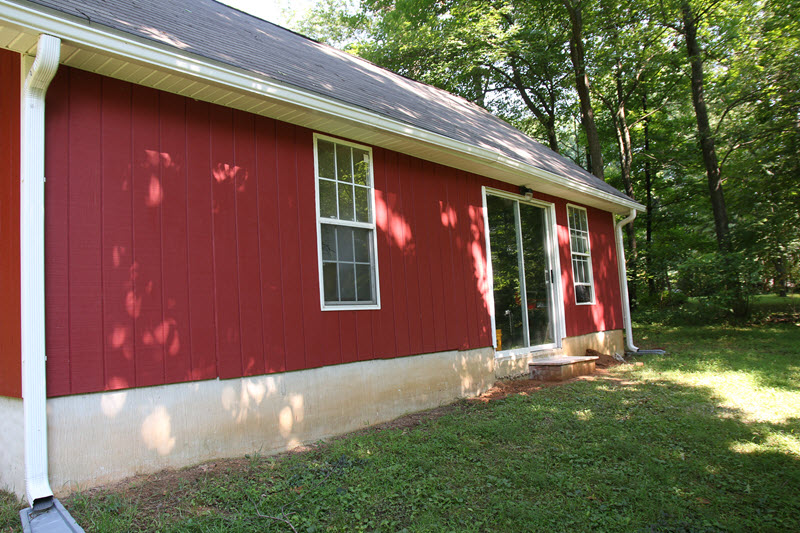 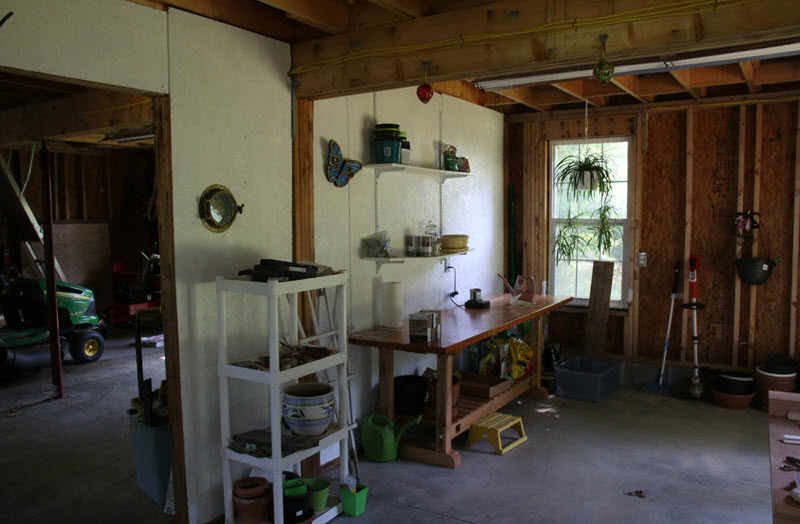 The bench is MB's new gardening bench. The top is made from a Cherry I sawed on the sawmill, and airdried for 5 years. The legs are red oak from a tree in our yard.

Back to Jack's personal page (sailing, woodworking and sawmill).