I've had a Siglent SDS1102CML two channel 100 MHz bench scope here for the last two years. I demand a lot from my test equipment so had low expectations when it arrived. After all, how good can a $359 unit be? Turns out, quite a good for the price. I reviewed it here. But the screen is smaller than most modern pro scopes with lower resolution than many would like. And 100 MHz just doesn't cut it for a lot of applications. I figured Siglent was positioning itself at the low end of the market.
But the company just released a series of scopes aimed squarely at the market segment owned by Tek and Keysight (née Agilent née HP).

The SDS 2000X family (gobs of info here) includes eight models that range from two channels at 70 MHz (for $885) to four channels with 16 digital inputs at 300 MHz for $2815 sans options. Those include an arbitrary waveform generator and decoders for I2C, SPI, RS232, CAN, and LIN. All of the units in this family feature a 2 Gs/s sample rate, 140 Mpts memory depth and 140,000 waveform/s capture rate.

Siglent sent me a SDS 2304X, which is the top of the line model with all of the options. This configuration sells for $3200.

First, check out this picture. The scope on the top is Keysight's MSO X 3054A, a 500 MHz unit, with four analog and 16 digital channels. I've had this for a few years and love it. The Siglent is beneath. It's actually a little smaller than the Keysight but foreshortening deceives the eye. 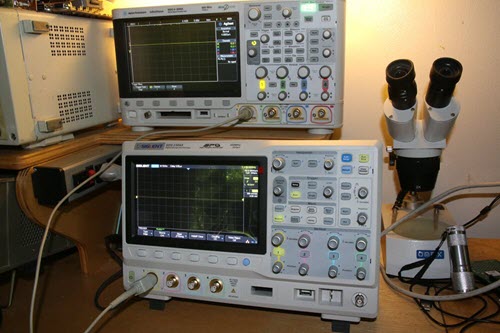 The layout is eerily similar. Like the Keysight, all of the Chinese unit's knobs can be pressed in to change some functionality. For instance, on both units pushing a vertical gain knob toggles the gain from the normal 1-2-5 sequence to a "variable" mode, where the gain is continuously adjustable. I don't find it useful but perhaps it makes sense if one were using the unit for automated testing.

The Keysight's knobs feel better, and the Siglent's buttons have a little bit of a mushy feel rather than a sharp snap.
Other features are different – for instance the Keysight has twice the lower unit's sample rate. It takes a wider range of probes.
But it is five times the price.

The Siglent's user interface is almost identical to Keysight's and is just as intuitive. It's a very easy scope to operate. There are a lot of modes, though, and I found myself referring to the 200 page pretty decent manual (supplied as a .PDF without clickable links in the table of contents) for the more obscure functions. The 800 x 480 eight-inch screen is very crisp and, unlike on their $359 model, I didn't find myself wishing for more resolution. Sometimes a lot of information is displayed and the characters can be quite small. The layout is an odd 8 by 14 divisions which is not a problem; just don't assume the usual 10 on the horizontal axis when measuring time.

One of the great things about digital scopes is the deep memory. With 140 Mpts there's a lot of data captured. You can take a single slow sweep and then crank up the time base to see lots of detail about the signal. The zoom mode displays, on top, the signal as it normally is, and on the bottom a blown-up view. Here's a 500 us/div acquisition (top) with a hole near the center. The hole is the width of the zoom. The bottom trace is the zoomed part of the trace, now at 1 ns/div. Also note the rise time is measured and displayed near the bottom of the screen: 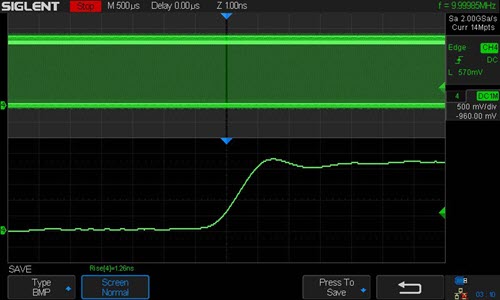 There is no search capability for finding things in the buffer, which some scopes have.

The SDS 2304X does all of the usual scope-stuff extremely well. I'll focus on what is different or what I found interesting.

The arbitrary waveform generator is a $188 option and it will produce the usual signals, plus those you can design using their EasyWave software on a PC. Sine waves go to 25 MHz; others to 10 MHz. This is a useful feature if you don't have an AWG, though the pulses and square waves are sloppy with 20 ns rise times; most inexpensive AWGs also have slow rise times. The functionality is very much like their SDG 2042X AWG that I reviewed here.

Automatic measurements abound. There are many dozens of them, and the few I tried worked flawlessly. Here the manual is a little weak; for instance the FRR metric is "The time between the first rising edge of source 1 and the first rising edge of source 2 of 50 voltage level." Not quite sure what that means but Siglent rewrites their manuals in the USA and I've reported it to them.

The SDS 2000X family comes in MSO (mixed signal oscilloscope) and non-MSO (i.e., plain old scope) models. MSOs are targeted exactly at the needs of embedded engineers, who use digital signals in concert with analog. This model supports 16 digital channels which are connected to the scope via this connector: 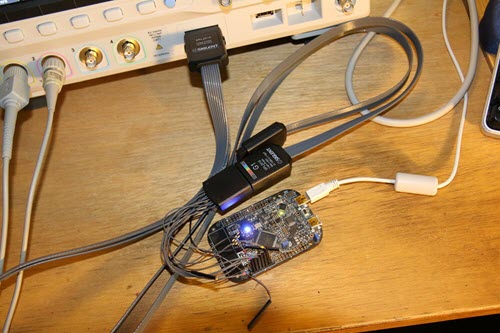 In this picture the digital channels go to a little Freescale board that I've programmed to generate patterns on the GPIO pins. The resulting display (only seven digital channels are connected) looks like: 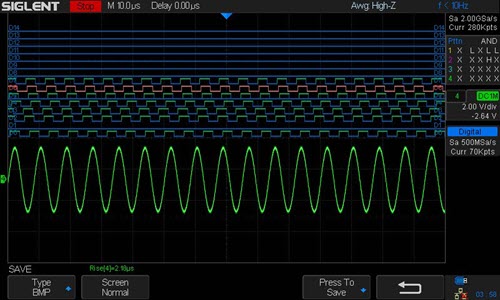 A critical feature of an MSO is that it can be triggered on an analog or on the digital channels. This cross-triggering helps us understand the relationship between the two parts of the system. In the picture above note in the upper-right-hand side a matrix of L, H and X – those are the 16 inputs and the values I set to trigger this sweep. A sine wave wandered through at the same time.

Supported math operations include the four arithmetical operations on any two channels, FFT, integration, differentiation and square root. With the exception of FFT all work well. On the SDS 2304X the Fourier transform is as good as on any other scope I've used – which is to say, not that great. None support changing the resolution- or video-bandwidth so one just gets a sense of amplitude vs frequency. The display always looks muddy; what should show as a sharp peak is very broad. Perhaps there are areas where this low resolution is adequate, but for the applications I gravitate to it makes much more sense to use a spectrum analyzer. Yes, this is another expensive instrument, but the scope and SA are very different animals, the scope being basically an amplifier and A/D, while the latter is more like a superheterodyne radio which achieves enormous gain and selectivity.

I think it was Agilent who introduced the notion of segmented memory when they came out with their MSO-X series of scopes. This feature lets you divide acquisition memory into a number of chunks. Each trigger event fills one chunk; the trigger starts getting data and stops when a chunk is full; the next trigger fills the next block. Surprisingly the Siglent has this feature and lets you partition memory into up to 80,000 chunks. It's not a feature I use a lot but at times it can be very useful. An example is tracing the behavior of a state machine. Send states out to GPIOs and trigger on, for example, a start state, and see how the machine behaves every time it goes through that state. 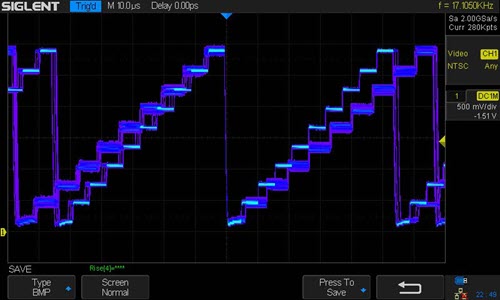 The unit includes a self-calibration feature which is somewhat different from some competing products. Often one has to connect all of the inputs to a cal-out with BNCed cables. On the Siglent calibrations are easier. Remove all inputs and select the self-cal mode. You can walk away for the few minutes it takes, or watch the psychedelic display on the screen which probably is showing the various signals the unit is applying. It's quite mesmerizing.

A press-to-turn-off button powers the scope. To power down one has to press and hold it for a few seconds. After a couple of days intermittently playing with the scope I still couldn't get used to the delay, and would always hit it, then realize the unit was still on. Better would be an alternate-action mechanical switch.

How things have changed! The company I worked for in the early 70's bought a Tek 7000-series scope. With plug-ins (many scopes did not come with vertical or horizontal amplifiers) it cost about $10k, or $50k in today's dollars. It had a lower bandwidth that the Siglent, no memory, and was completely analog without the features described here. Yet this modern unit with much fantastically-more capability is $3k. Amazing.

So there you have it – a quick run-through of Siglent's latest offering. Despite a few minor nits this is a heck of a scope at a killer price that any engineer would be lucky to have. I recommend it for a professional engineering lab and for advanced hobbyists.