Over the years I've reviewed a number of high- and low-end oscilloscopes. Tektronix's MDO4000 series, for instance, has phenomenal performance, an incredible set of features, for about the price of a low-end SUV. They also have a series of very low-priced units which I have not had a chance to look at. Their TBS1000B-EDU series starts at an amazing $520.

On the low-end there's a veritable sea of units for a few hundred dollars or less. These connect to a PC via USB and have neither their own screen nor controls. The PC is the front-end; the unit is just a data collector. An example is Digilent's Analog Discovery, which is a good vehicle for learning about electronics. For folks with limited needs who want to spend the absolute minimum these are decent choices. But with a very few exceptions bandwidths are very low.

But most of these USB scopes are toys, or at best entry-level products for people learning electronics. If you need more than a few MHz of bandwidth -- and even a mid-level hobbyist does - they are mostly non-starters. While many of those instruments have a pretty decent GUI, I much prefer a set of real, physical knobs.

In the middle of the pack are a few real bench instruments, including screen and controls, just like their very expensive kin. Siglent is one of several Chinese vendors of these devices, and they kindly sent me a unit. I asked for one of their lower-end instruments, one where the price is attractive to a wide range of users and where there's little competition from the big scope vendors. They sent an SDS1102CML, a dual channel 100 MHz digital scope. 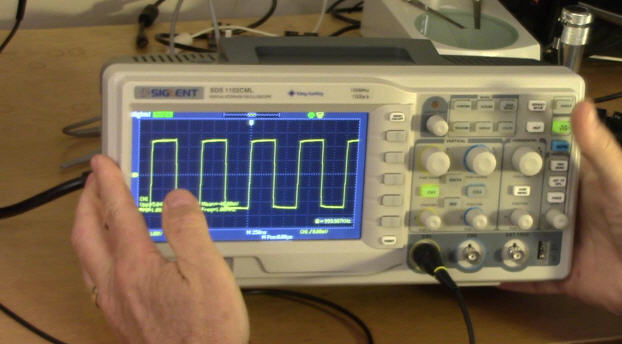 It retails for $379. At that price I figured it might be OK for hobbyist work but would be disappointing to a pro.
I was wrong.

The unit is plastic, like most instruments today, but the package belies the low price. It's rugged, not in the least chintzy, and the controls have a solid feel. Googling turned up some complaints that the power button is a common point of failure. Over the last two months I've turned it on and off several times a day but had no problems with the switch. No panel cover is included, but loading it into and out of a soft-sided briefcase didn't snag the controls.


Some competing units in this price frame save money by using one set of controls for the two vertical channels. The Siglent has separate controls for each channel. If you're doing a lot of work with both enabled this will save a lot of time and annoyance.

As mentioned, the screen is 7" diagonal TFT with 480 X 234 resolution. That's low enough that the waveform will be a little jagged from time to time, but the on-screen numbers and letters are easy to read. Most scopes have ten major divisions ("boxes") across the horizontal axis; strangely, the SDS1102 has 18.

The included probes are nothing special and a bit upscale from cheap. But a single passive probe from one of the major vendors can cost as much as this scope and probe set. A switch selects X1 or X10. The scope can't sense the setting, but it will let you manually select a number of attenuations from X1 to X1000.

I was curious about the scope's real bandwidth with the supplied probes. 100 MHz is impressive at this price point, so could the vendor be fudging the numbers a bit? Using a good signal generator and calibrating it against my 500 MHz Agilent, the -3dB point was reached at 141 MHz, much better than I expected or than the datasheet promises.

An on-screen six-digit frequency counter is accurate, by my measurements, to 1 LSB. That's better than the 0.01% advertised.

Like some of the much more expensive equipment in my lab the rotating controls can all be pressed in to select another mode. For instance, the vertical gain knobs have the normal 1, 2, 5 sequence, but when pressed in give very fine control over the gain.

Pressing the horizontal sweep knob enables delayed sweep (see the following screen shot). The upper trace is the raw signal; the black areas is blown up in the bottom trace. In delayed mode rotating the horizontal control changes the width of the black space letting one zoom in on a portion of the waveform. The horizontal position control scrolls left and right through the signal.

Delayed sweep mode. Channel 1's gain is shown as 1 kV/div because I told the scope the X10 probe was X1000.

In the bottom trace you can see the A/D's quantization, which is not surprising given its 8 bits of resolution.

There's one "do all" knob that is used to select options from screen menus. I found it much too sensitive. It's sometimes hard to not scroll past the desired option.

Trigger options abound; next to the price and the 100 MHz bandwidth, trigger is the best feature of the scope. For we digital people, I especially liked the ability to trigger on a pulse's width (using >, <, =), or rise or fall time.

Some analog waves jittered a bit, moving back and forth a few pixels. Pulses didn't, so I suspect the trigger level has a little uncertainty. It wasn't objectionable; in fact, I have noticed this on many USB scopes as well.

In the olden days we counted boxes and did a bit of math to measure frequency and other parameters. The Siglent, like most digital scopes, has no shortage of things it will automatically measure. The scope will figure about two dozen different parameters, like peak-to-peak, average, overshoot, etc. The measurements were accurate and easy to use.

People have complained to me about their digital scopes splashing menus on the screen, obscuring the trace. They're all guilty of this. As you can see from the picture above the "save" menu eats some of the right hand side. But press one button and it all goes away.

Five math operations are supported: *, /, -, + and FFT. Subtraction is nice when looking at differential signals, but with the exception of FFT I never use the others. The scope does a good job FFTing signals like sine waves, but can give very muddy results with more complex inputs. A square wave's Fourier Transform looks superficially correct, but I could not pick out the expected odd harmonics, and I think there's something wrong with the software.

The scope did lock up once after saving data to a USB stick. And after two to three days turned on all of the controls continue to function, but it stops acquiring data. This is repeatable. Fortunately the boot time is only 11 seconds.

I plan to do a follow-up after a year or so of experience with the unit. But the bottom line is that this is an excellent value. It's not a Tek or an Agilent, but also doesn't carry those price tags. The SDS1102CML is positioned at a very attractive bandwidth and features point, and the price is unbeatable. I definitely recommend it.

If you'd like to see the scope in action, check out these two videos here and here.