One of my pet peeves is oscilloscope probes. We tend to give them little thought, which was fine in the olden days of slow signals. Now probes are more problematic.

When Keysight introduced a 30 GHz scope I called and asked "what about probes?" No problem, I was told, as new matching probes were available... for $28,000 each! Four of those and you could buy a house in some areas.

Consider the following picture. The scope is sensing the output of my "squarer-upper," a box I made that squares signals from my Siglent SDG-2042X arbitrary waveform generator. Most AWGs have a relatively slow rise time on pulses, and my squarer-upper reduces that to about 700 ps. The top trace is with an Agilent 500 MHz probe, a $200 unit. The bottom trace is from a Chinese 100 MHz probe that came with a scope; the cost is probably ten bucks or so.

Note the difference in rise time.

The March/April issue of Elektor Magazine (sorry, subscription required) has an article by Alfred Rosenkränzer about an active differential probe that caught my fancy. A circuit is provided but I sent off 129€ to get an assembled version. The specs are impressive: using differential inputs the input impedance is 5100 ohms, or 2550 when using a single-ending input. What blew me away was a claimed 1.9 GHz -3dB bandwidth, and a 300 ps rise time. An equivelent probe from the major vendors will be thousands of dollars.

It's powered from a USB port and is basically just some voltage regulators driving an ADA4927-1 differential op amp.

Does it live up to the hype? You betcha. The following shows, in red, how it compares to the Chinese and Agilent probes. Sure enough, the measured rise time matches the 700 ps of the squarer-upper quite well: 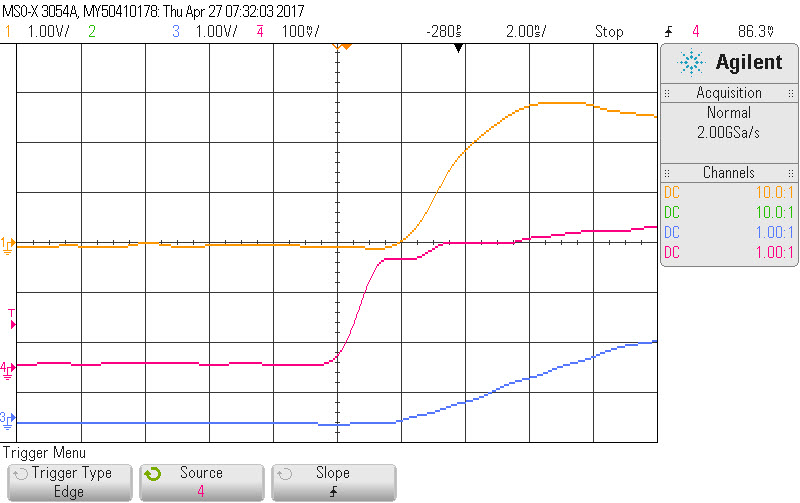 (The time shift is due to the different lengths of probe wires. As I complained to my wife while doing this, the darned slowness of the speed of light has been haunting me for 40 years!)

One down side is that it has a lousy connection to the node being tested. The input is just a two-pin header (show by arrow in next picture). Now, connecting probes to a high-speed target is always a headache, but you'll miss the convenience of a normal grabber-style probe. 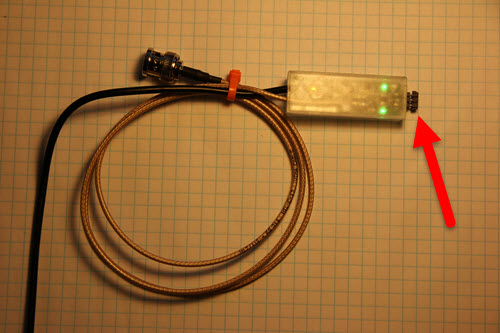 It has a +/- 12V range; with no input protection be cautious using it.

Mr. Rosenkränzer doesn't have a web site, but you can contact him at alfred_rosenkraenzer@gmx.de. As mentioned, it's 129€ plus shipping.