Summary: Tony Sale, who built a replica of Colossus, passed away this month at 80.

The best-kept secret of World War II was the breaking of the German's codes. The wizards at Bletchley Park in the UK learned to read messages ciphered with the famous Enigma machine.

But much more was going on at Bletchley. Another German code was called "fish" and the boffins referred to the code and the enciphering machine as "Tunny." To assist in breaking Tunny Tommy Flowers made the bold proposal to build a machine that used 1500 vacuum tubes. It was a laughable idea since tubes burned out so often, but Flowers not only built the machine, he made it reasonably reliable. This was Colossus, the first electronic digital computer. Neither programmable as we know today nor general purpose, Colossus was so effective Churchill ordered all ten destroyed at war's end. The secret didn't leak out till decades later, so ENIAC was long thought to be the first electronic digital computer.

Little information was preserved. Essentially all of the drawings and schematics were burned. But Tony Sale, once an MI5 officer, was determined to ferret out the secrets. Over the course of 14 years he and other volunteers managed to recreate a working Colossus. It's one display - and generally in operation - at the National Museum of Computing at Bletchley Park.

Sale managed to find contemporary components like the huge number of vacuum tubes. He had so little to go on that he had to recreate the logic used to decrypt Tunny.

Any computer nerd who finds him- or herself in the UK must visit Bletchley. The Colossus machine is amazing. It's roped off to keep gawkers away, but I found the staff very easy to chat up. It wasn't long before we were invited to walk inside the machine. See the picture I took below.

There's more at Bletchley, including several Bombes which were used to break Enigma. On our tour an elderly lady, escorted by her son, told us she had worked on the Bombes during the war. Alas, her memory was cloudy and she couldn't shed too much light on her experiences.

I've always admired Sale for his persistence and brilliance in bringing Colossus to life. It was a hugely important machine in the history of this field. 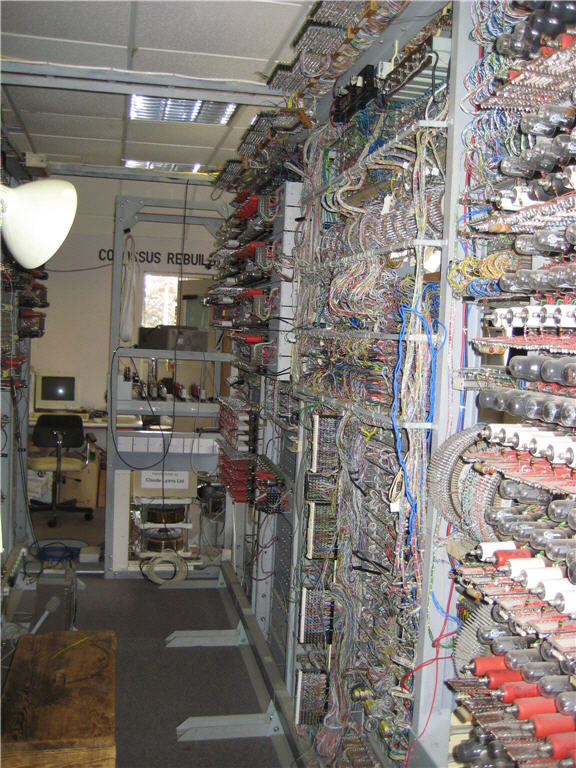