My dad grew up during the depression and was in the Navy in the tail end of WWII. He had little use for Japanese products, and to this day sniffs at anything from China. If it's not made in America he's not interested in the product, and anything from China is, in his opinion, junk.

Thankfully he doesn't read these columns, because Siglent sent me their very new SDG2042X arbitrary waveform generator (AWG), which is made in China, and, well, American competitors may find themselves squeezed by the product. It's in a hefty metal box with a plastic handle and shock protectors and feels as solid as anything from the big guys. If "Siglent" were erased from the label I'd assume it was from Keysight or Tektronix. The difference is that the Siglent costs $500 and the others are (at least) ten times the price. I have one of Siglent's lowest-end scopes and, while I like it, it's noticeably more "plasticy" than my Agilent (though much less costly). The AWG hasn't a bit of cheap or plastic feel to it. 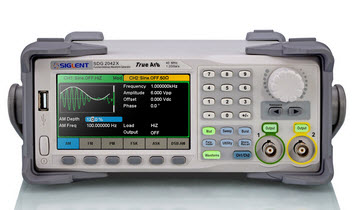 The unit has two independent and duplicate channels. So you're getting two AWGs in one.

A hugely-important specification for any AWG is the sampling rate. Generally there's no one number for a particular unit, which is the case with the SDG2042X. For the basic built-in waveforms memory is sampled at 300 MS/s. However, and possibly uniquely to this unit, another clock interpolates the data four times for each sample period. The result is an effective rate of 1.2 GS/s. Now, that's on the built-in signals like sine, square, etc. For arbitrary waveforms the unit samples at 75 MS/s.

Vertical resolution is 16 bits, on a par with the best units available, with a 20 Vpp output. The unit they sent me is 40 MHz (sine waves; other waveforms are slower). An 8 million point buffer means it will generate just about any sort of signal. It includes all of the usual modulations like AM, DSB-AM, FM, PM, FSK, ASK and PWM. Each of those are controllable; for instance, the shape of the modulating signal is selectable. Normally one might sine-wave modulate an AM signal, but the unit can use any of a number of shapes, or even an arbitrary shape. I used the EasyWave software (more on that later) and created totally random waveforms which were stored in the AWG's memory. Those can be recalled and used, not only to generate a signal, but as the shape of the modulating signal. 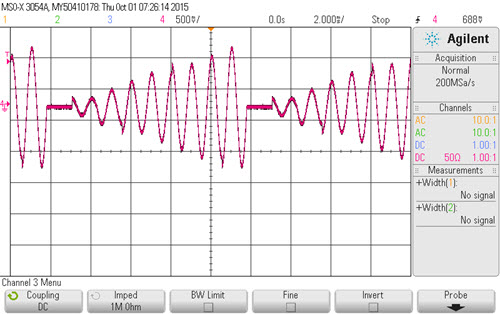 This is a sine wave modulated by an arbitrary waveform created on my PC.

Pulse rise and fall times are completely variable, with rise times down to 8.4 ns.

Frequency precision is rated at +/- 1 ppm. At 40 MHz I measured a 0.5 ppm error. A frequency counter (the signal goes to a rear-panel BNC connector) is available that works even when both AWG outputs are operating. With a resolution of 1 Hz it was spot-on to the signal I provided.

The two channels can be linked in a variety of ways. One can have a frequency, amplitude or phase that is some multiple (integer or otherwise) of the other, or that can have some offset from the other. So channel 2's frequency can be twice that of channel 1's, or it could be 1.22345 Hz higher. In the following picture the scope shows the output of the two channels when one's frequency is twice the other. If I had taken a single sweep instead of running continuously, the Lissajous curve on the top trace would be a simple sine wave with half the frequency of the blue trace. But this looks cooler: 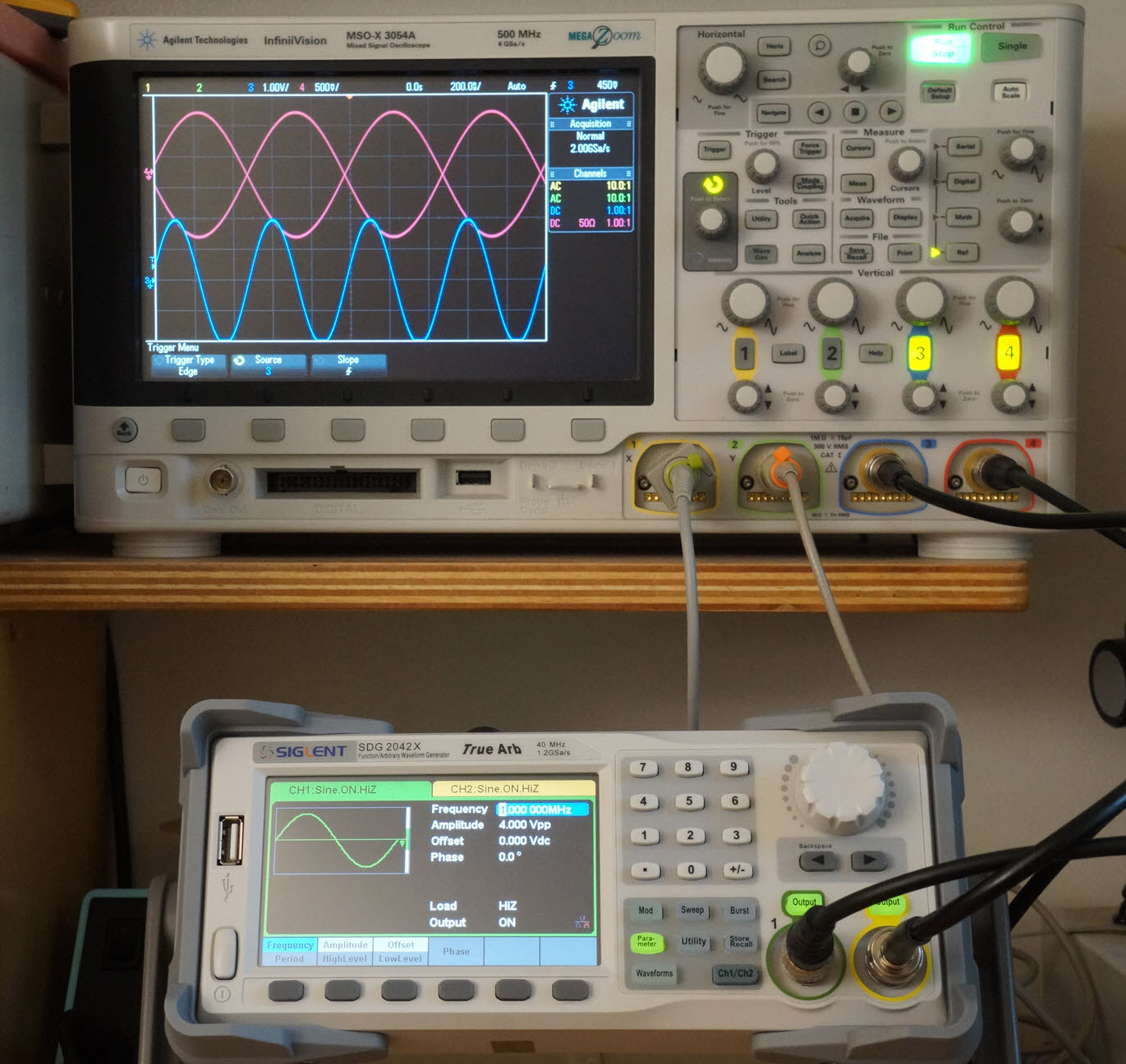 The unit has a touch screen which works well, but I found it more convenient to use the buttons. The screen is bright and the letters very crisp. It does show a graphical view of the signal being produced. This is quite accurate even for arbitrary waveforms created using the included PC software. The one case I found where the display doesn't mirror the output is for pulses when you're adjusting the rise time. There's so much control of that parameter it's easy to turn a pulse into a ramp, but the screen always shows a pulse.

An AWG is conceptually pretty simple: just scan through memory tossing data to a DAC. The devil is in the details, including the analog. One quality metric is a sine wave's harmonics. In the unit supplied to me these were an amazing 70 dB down from the 40 MHz fundamental. That's 15 dB better than the spec, and about equal to Keysight's $5000 33612A.

The included "EasyWave" PC-hosted software can control the AWG. Documentation is scarce and I couldn't figure out some of the functionality. There is a help file, but it was complete gibberish, most likely being a binary file of some sort. Fortunately, most of the features are pretty easy to figure out. One nit: to send a waveform to the unit one presses "Send Wave", but then one must, every time, select USB or Ethernet, and then a device selection menu appears. What should take one click requires three.

The software has a lot of capability. A number of waveforms are built-in, and of course it will import a .csv file. It's trivial to hand-draw a signal and download that to the AWG. Intriguingly, one can enter equations to create a signal; supported functions and operators are sin(), cos(), abs(), sqrt(), e, log(), pi, +, -, *, and /. The unit faithfully produces the desired signal, and that is shown on its display. The following is a screenshot of the EasyWave software displaying the signal 2*sin(x)+cos(x*pi): 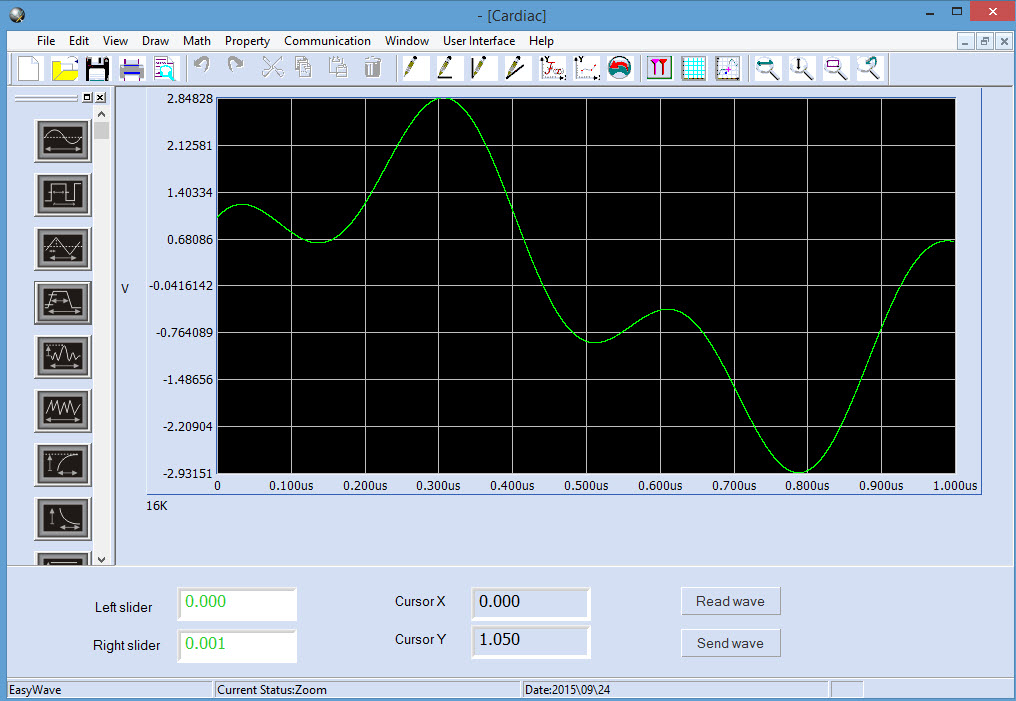 What's the worst thing I found about the unit? The big control wheel that selects parameters like frequency works well, with one glaring exception. Suppose the frequency is 25.100 MHz. If the "5" is selected, rotating the knob to the left decreases it exactly like you'd expect. Until it hits "0," at which point the cursor jumps to the digit to the right of the decimal point. So while cranking numbers down you suddenly find yourself selecting the fractional part when most of the time you want to continue setting the integer part.

The SDG2042X does everything one would expect from a high-end AWG at a price that can't be beaten. With 16 bits of vertical resolution, an 8 mega-point buffer, fast sampling, and a very complete set of features it's a professional unit that will more than satisfy all but the most demanding engineer. I reviewed the 40 MHz model, but 80 and 120 MHz variants are available for $619 and $899 respectively. There's more info here: http://siglentamerica.com/pdxx.aspx?id=1364&T=2&tid=16.

But don't tell my Dad I like this Chinese product.