Reflections on a Career

I recently read a book about the history of the Patapsco River, an important tributary in Maryland, and was struck by the slow pace of change over human history. A 17th century farmer's life was likely no different from that of an agrarian several thousand years earlier. For most of human history one's life was pretty much like that of one's great-grandparents.

The industrial revolution took place yesterday, considering humankind's long presence on this planet. Starting in the mid-18th century it moved people from the land into factories and created all sorts of consumer goodies. But people remained largely poor; I read (somewhere) that in 1810 94% of the world's population lived in extreme poverty compared with 10% today. (Interestingly, in absolute numbers, roughly the same number of people remain in that unenviable lot today and two centuries ago).

My late grandmother was born in 1898. She grew up in Manhattan. I once asked if she had had a telephone; her reply was that she did know someone, on the other side of the island, who had one. I well remember in the 50s and 60s how any long-distance call was a matter of Dad's urgent business or an announcement of a death in the family. In fact, here in the USA it was illegal to own a phone then; Ma Bell leased them to consumers. Yet now pretty much everyone is glued to their personal phones.

In my family, in the course of three generations, this technology has gone from unattainable to routine. Except that today's devices don't resemble those of 1910, 1950, or even 1980 at all; they are battery-powered computers that just a few years ago would have been impossible-to-imagine.

As a kid the technology we had wasn't much different from that of 1930. Dad built a vacuum tube Heathkit radio and amplifier which were, for many years, the family's sole source of music. We did get a TV around 1960. Black and white, it required constant fiddling with the horizontal and vertical sync controls to show a picture. I suspect the first transistorized anything we had was from the mid-1960s when I built a pair of Heathkit walkie-talkies.

About a year after Intel introduced the first commercially-successful microprocessor I became an engineer. We were using the 8008, a revolutionary device that in many ways created the entire embedded systems industry. Yet that chip needed an army of support electronics to do anything useful. An entire board full of logic gave it the capability to run software, but one still needed another board of chips for RAM (typically 4KB) and yet another for EPROM to store the program. That was in 1702s, a 256 byte (not a misprint) ROM with a quartz window. Expose the silicon to intense UV light for a quarter hour and the chip was a clean slate ready to be reprogrammed.


One of our early 8008 products required 4KB of program space (in 16 EPROM chips!), yet it did floating point linear regressions and took data in real-time at tens of microseconds rates.
That 8008 was about $650 each (just for the chip) in today's dollars.

Now, 40+ years later, programs are often megabytes in size. Microcontrollers offer complete computers, memory and all, on a single chip for less than a buck. The $5000 five MB hard disk (with a removable 14" platter) we used in the early 70s has been replaced by a $50 terabyte drive. 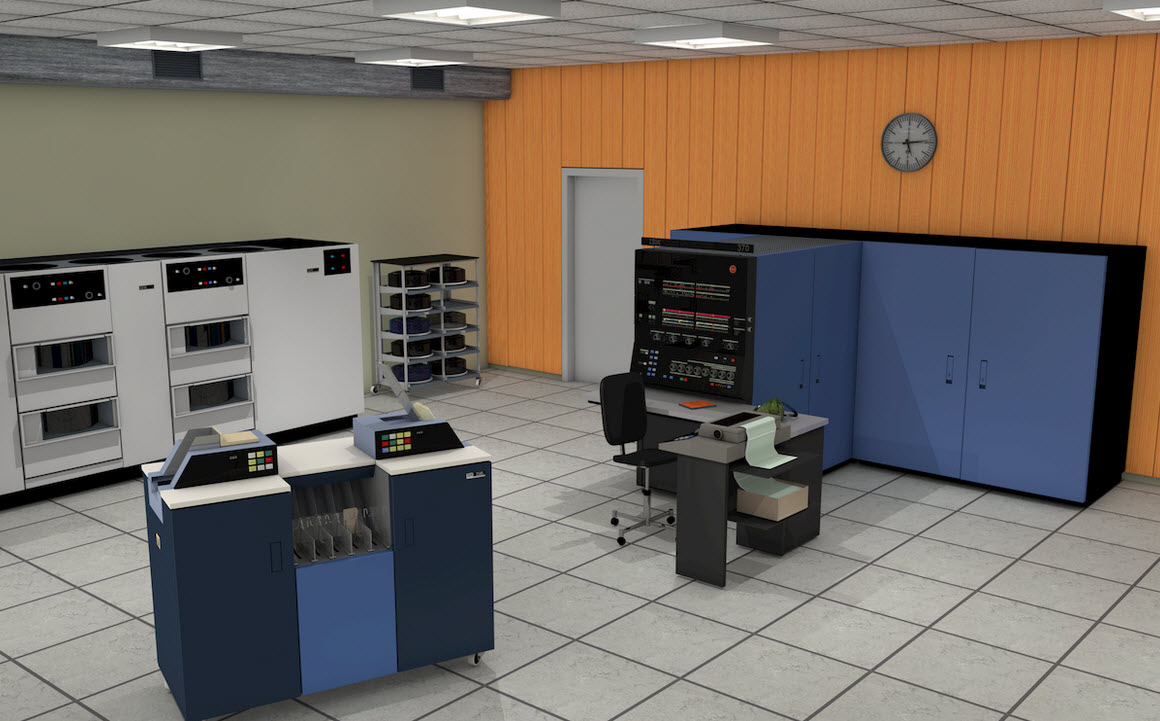 A personal computer, circa 1970, From Wikipedia

How things have changed!

Yet many professions have not. One of my brothers sells jewelry to stores. He claims that the business is just like it was four decades ago, except that the number of stores has declined due to on-line shopping. Another is a philosopher who uses modern tools to expound on ancient ideas.

Electronic engineering is a field where change is the only constant. Some wags claim the field is reinvented every two years, a silly notion considering just how much of our knowledge base remains unchanged. Maxwell's Laws, Kirchhoff, De Morgan, transistor theory (at least most of it) and so many other subjects foundational to our work are pretty much the same as in our college years. But the technology itself evolves at a dizzyingly pace. The mainframe shown above could now exist on a single fleck of silicon no bigger than a fingernail. Instead of costing millions, today they are so cheap they're used as giveaways.

It's hard to point to any bit of our tech that is unchanged. The lowly resistor is now an 0302 thin-film device. Supercaps offer farads of capacitance. Where a four-layer PCB was once unimaginable, today it's not rare to see layers stacked tens deep. Buried vias? Who would have dreamed of such a structure 40 years ago?

Embedded software has changed as well. In the 1970s it was all done in assembly language. C and C++ are now (by far) the dominant languages. One could argue that C took over around 1990 and has stagnated since, but the firmware ecosystem is nothing like it was a years ago. Today one can get software components like GUIs, filesystems and much more as robust and reasonably-priced packages. Static analyzers find bugs automatically while other tools will generate unit tests. Where we used to use paper tape for mass storage when developing code, patching binaries rather than reassembling to save time, now fantastic IDEs can graphically show what tasks execute when, or capture trace data from a processor furiously executing 100 million instructions per second.

Embedded systems have always suffered from being the neglected kid in town; all the tech glory goes to iPads and PCs. The hundreds of millions of lines of HDL needed to design a tablet's SoC represent an incredible engineering accomplishment. But to me, much more exciting are the modern 32 bit microcontrollers that cost nothing yet offer fantastic performance.

We're at a singular point in history, at least embedded history. Today cheap yet very powerful 32 bit MCUs that include vast amounts of memory and astonishing arrays of peripherals, coupled with their extremely-low power needs and widely available communications I/O and infrastructure, are redefining the nature of our business. And don't forget the huge number of sensors now available – a gyro used to be big, power-hungry and expensive. Now you can get one for a couple of bucks.

There has long been a desire for insanely-cheap devices that run for years on a primary battery and that can push data from pretty much anywhere back to where it's needed. That technology is here, now. Expect to see some very cool products hit the market.

Thinking about the changes I have seen in my years as an engineer makes me believe that this is the greatest career on the planet.