Every Monday morning I catch up with the technology blogs and articles, including Colin Wall's. His August 4th entry was about driving – how the roads are getting more crowded and, he feels, the skills of most drivers are in decline.

I agree with his first proposition but am not so sure about the second. People have always been maddened by other's skills or lack thereof. Congestion just makes the problems more visible. About 1971 a new section of Route 95 opened between Washington and Baltimore. With four lanes each way one could drive at 100 MPH (not legally) and rarely see another car. Today that same route is often a parking lot and getting to the posted 65 MPH more an aspiration than a reality.

45 years ago I caused an accident, not serious, the third of my short driving career up till that point. And the last one till two years ago when on a dark, dark night two blocks from home I hit a deer. I'm not sure if this is a matter of luck or skill, but suspect it's more the former rather than the latter as I'm not a particularly great driver. My parking is a family joke, and, yes, I did drive down a sidewalk in New Orleans recently but it sure looked like a driveway to me.

But I don't tailgate, leaving a wide gap between my bumper and the person in front of me. That's an engineering judgement – add margin to a system to absorb unexpected stresses. And I maintain a reasonable speed, not the oh-so-common breakneck pace that seems to indicate the driver feels he's being pursued by all the demons of Hell.

Recently while on a high-speed ramp a car went flying by, probably doing 30 MPH over the limit. He spun out, ending up on the shoulder pointing into traffic. What was amazing was within a second he was underway again, as if this was an everyday occurrence. I would have needed a few minutes to compose myself.

I'm told the EMS people call collisions "crashes" rather than "accidents." This makes a lot of sense to me since so many are really on-purposes. When someone elects to perform an unnecessary dangerous maneuver he has made a decision, and we are responsible for our decisions. If X leads to Y, and Y is an undesirable outcome, don't do X.

In his article, Colin proposes mandatory retesting of drivers in certain situations, for instance when one gets older than 70. Here in Maryland one can get quite old without retaking the test. My Mom just renewed hers for eight additional years by mail. She's 90. Maybe some retesting is logical.

But I do wonder about the efficacy of this. A newly-minted license says nothing about a 16-year old's ability. We know these kids are barely-competent behind the wheel. The test insures they can park and know the rules of the road, but has no correlation with safe driving behavior.

Today we have the curse of technology making the roads even less safe. You can't drive far without seeing some moron texting behind the wheel. A few weeks ago a young mother driving down the road perpendicular to ours was engaged in some oh-so-important texting and drifted across the other lane directly into a telephone pole.

And we have the blessings of technology. She and her one-year-old were merely scratched while the car was destroyed. The air bags did their thing, which is a credit to those engineers who, years before the crash, designed such an effective safety mechanism. Yet there's a feeling that adding air bags, traction control, and the like leads to more dangerous behavior. But at least some data seems to belie that: 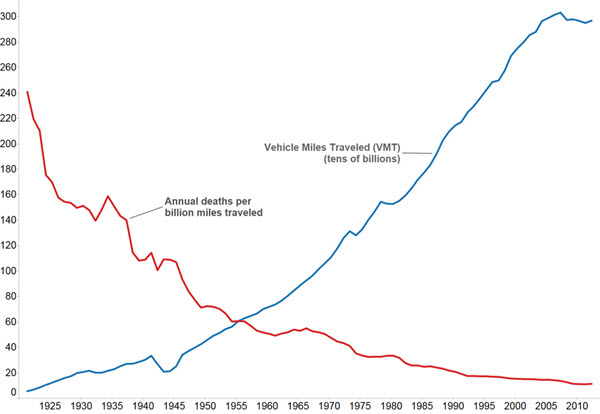 Colin is in favor of self-driving cars and expects to see them in a few years. I, too, can't wait for that technology. But the Google et al approaches are not near-term as the cost for all of the gear is sky-high. Google builds in redundancy which can only increase costs even more. Volume production will eventually change all of that, of course.

I think the biggest hurdles to automating automobiles will be regulation and litigation. Be sure that if there's a minute probability that technology contributed to a fatal crash the lawyers will find the car companies' deep pockets irresistible.

In the meantime, drive safely. I've tried to teach my kids to periodically evaluate their habits behind the wheel. Self-reflection is a worthy task for any activity in life, but especially for those where a momentary mistake can have tragic consequences.