Summary: GPS is becoming as ubiquitous as the power grid - which is both good and bad.

"With great power comes great responsibility" - Uncle Ben, Spiderman. Others from Jesus onwards have made the same point.

The first time I used any electronic navigation was in the 1970s while delivering a boat from the islands. The owner installed a brand spanking new Loran C unit - which didn't work. We relied on Loran A. The navigator lined up two pulses on an oscilloscope screen and read out the time difference between them, then plotted the result on a chart festooned with hyperbolic lines representing those differences. It was accurate to a mile or so, but had the wonderful advantage of giving the user a real sense of the operation. No pulses, no position. Weak pulses, more error.

As Loran C became the norm the older Loran A system was shut down. We still had radio beacons which transmitted Morse signals from lighthouses to back up the Loran.

Now GPS has completely eliminated all other forms of electronic navigation from the high seas and just about everywhere else (aviation, though, still has a number of other systems). Anyone with a smart phone has a GPS in their pocket, a totally astounding feat of engineering. Imagine - that little box is sucking satellite signals to give our position accurate to a handful of meters. It's truly amazing, and it's a system I'm really thankful for.

But no good thing goes unchallenged. Enter "GPS jammer" into Google and you'll get hundreds of thousands of hits. The bad guys seem to inject their evil into every possible but of goodness. An example is here: http://talksatellite.com/EMEA-A1474.htm.

It's not only the bad guys. The US Navy accidentally jammed GPS signals in San Diego in 2007 (http://www.navcen.uscg.gov/pdf/cgsicMeetings/47/%5B09%5D%2017%20GPSOC%2047%20A.pdf ). Much more than navigation was effected: cell towers, medical pagers and even the availability of the local Coast Guard vessels were all disrupted. It's common for ATMs and many other devices to use GPS for time signals and more.

In the UK the Ministry of Defense plans to jam GPS in July for some trials. The good news is they have released information about their plans (https://ktn.innovateuk.org/web/128938/articles/-/blogs/notification-of-mod-gps-jamming-trials-in-may-and-july-2011?ns_33_redirect). The reality is that most users won't get that info. Will any of the devices that rely on GPS for time get reprogrammed or somehow hardened against this white-hat jamming? I doubt it.

Loran C was shut down in the US and Canada last year. There's but one backup system, the Russian GLONASS, but how many devices use it for redundancy? When the European Galileo comes on-line it, too, could provide redundancy. We embedded designers, probably for reasons of cost, don't include GLONASS as a backup now, so I suspect we'll also ignore Galileo. No doubt we'd need additional antennas and RF circuitry to use these alternatives, so no matter how much silicon magic clever engineers invent it will always cost more to use these redundant systems.

For better or worse, GPS is becoming part of the essential fabric of 21st century life. It's almost like the power grid in its ubiquity. GPS is a truly wonderful system, but represents another single point of failure. As we design in more essential services that are devoid of backups we balance ever more perilously on the razor's edge. 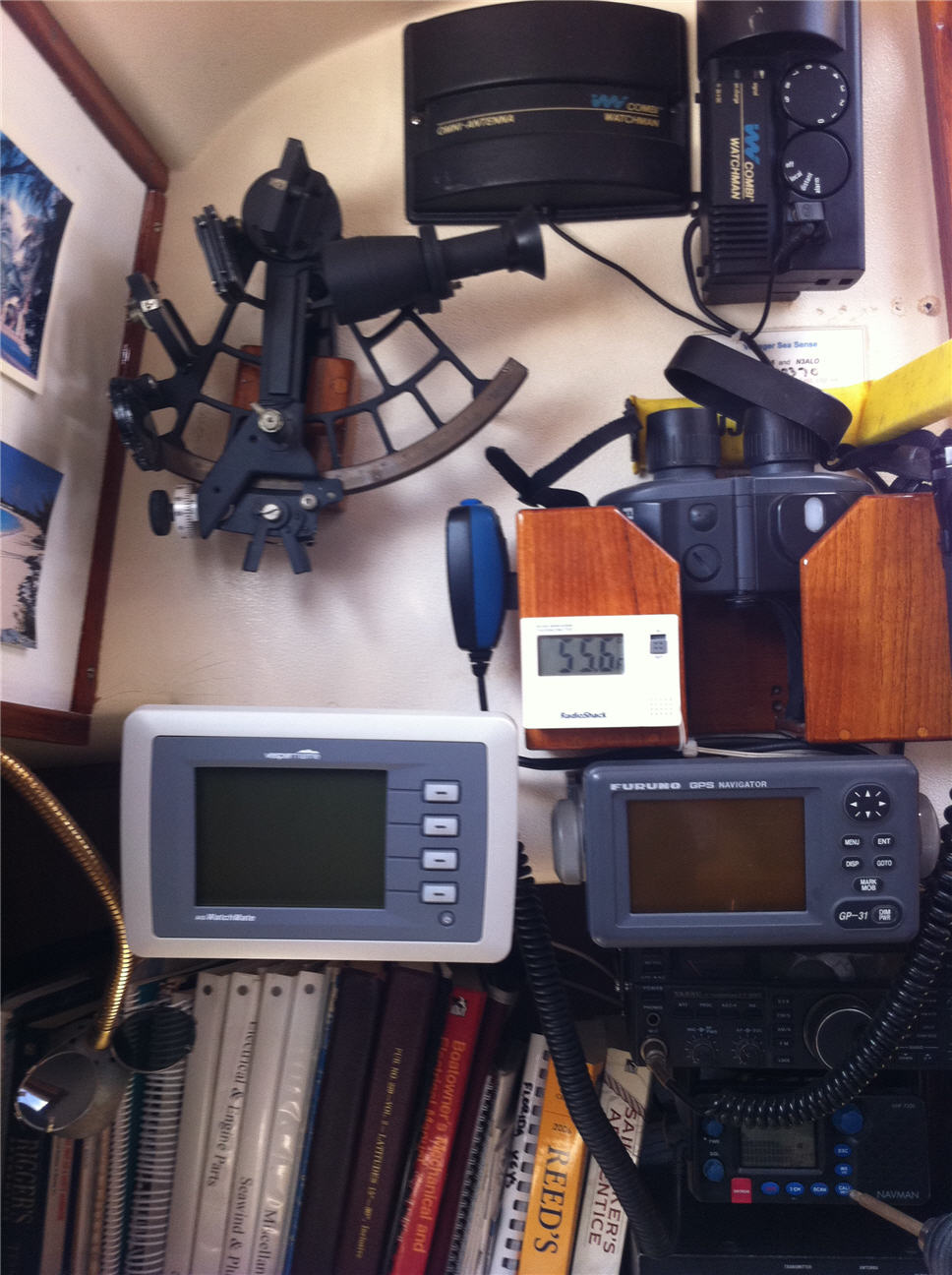 Redundant navigation on my sailboat: the gray box on the lower right is the GPS, the sextant is above to the left.