Summary: Virtual instruments are great, but give me knobs.

Today there are dozens of oscilloscopes, logic analyzers, arbitrary waveform generators and other sorts of test equipment that, connected to a PC via USB, leverage the PC's screen and keyboard. Why burden the equipment with an expensive display and panel full of knobs?

But I prefer a conventional instrument with a screen and knobs. Maybe it's because I'm an old fart, used to old-style equipment. But it is interesting that Tek, Keysight and the other top-tier vendors do a brisk business with stand-alone gear.

Before the IC revolutionized, well, everything, all scopes had knobs of course. But one needed quite a bit of strength to operate these as some of the controls were rather hard to turn. The time base control turned multiple selector switches and was sometimes connected via chains or gears to quite a few other moving components. Thankfully all of that has changed.

When working on a circuit I don't have enough hands and eyes. You've got a probe in each hand and a third in your mouth. and now you have to mouse around to select an instrument's operating mode?

My eyes are on the circuit, trying to ensure the probes are in the correct spot, or watching for that telltale smoke. A glance up and there's the scope's screen. The PC is probably off to the side - which window do you want to look at? Bifoculed people may have a pretty substantial change in distance between the unit under test and the PC, requiring risible squinting and head contortions to find a non-myopic focus point.

The mouse requires a certain amount of precision to select an exact position on the screen. A knob doesn't - just reach and spin. Now, I do remember Tek's 7000 series of scopes from the 70s. They had a sea of tiny illuminated buttons one had to press. Though the scopes were great for that era the buttons were much too close together. 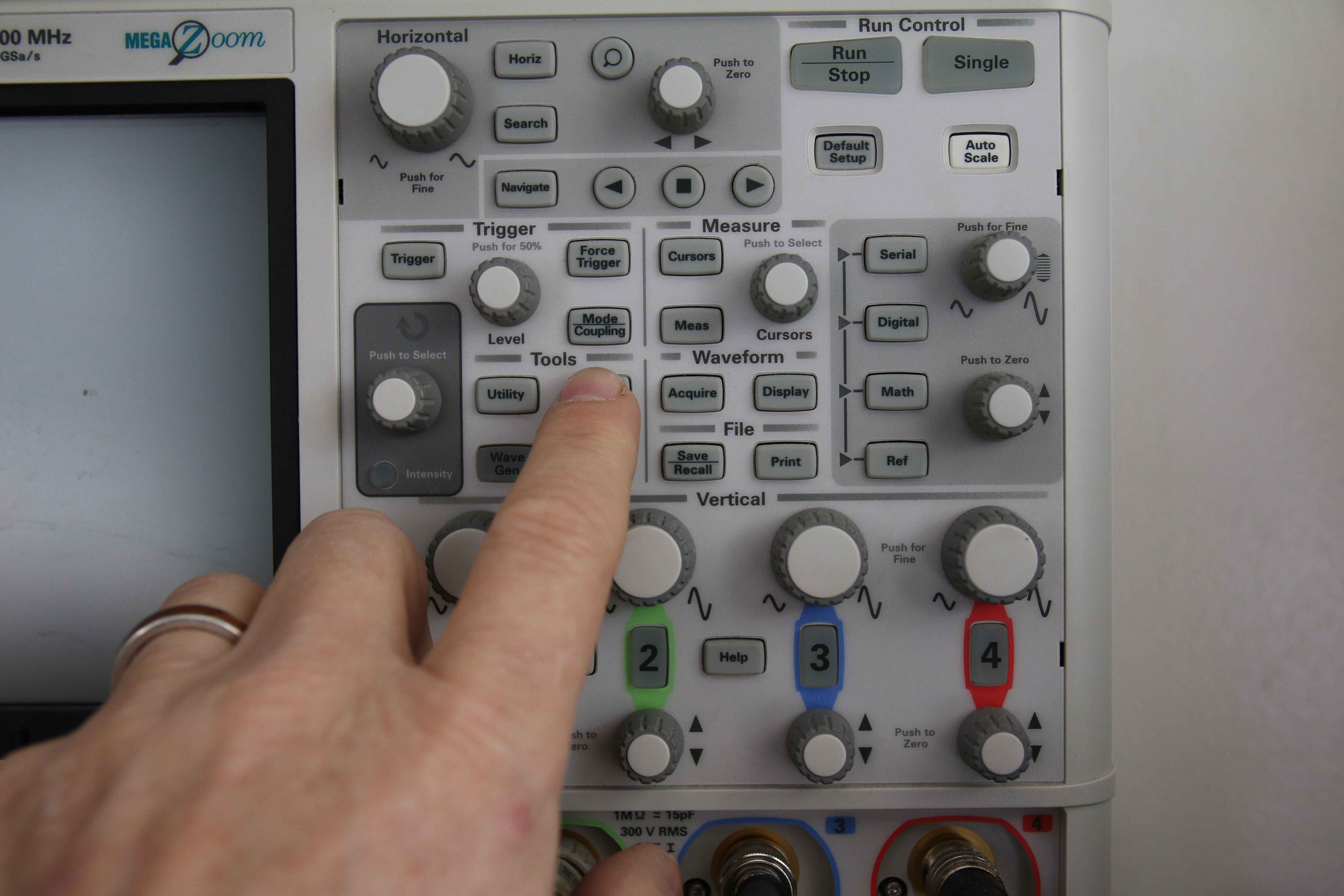 Stabbing a button on this MSO-X 3054A is easier than mousing around.

Some standalone instruments now have touch screens. I'm not wild about that feature. Generally selection items are much too close together, again requiring a precision that can be hard to maintain in a frantic troubleshooting session. Stabbing a calloused finger at the screen doesn't always work, and having to rub around a bit to select a function is frustrating. 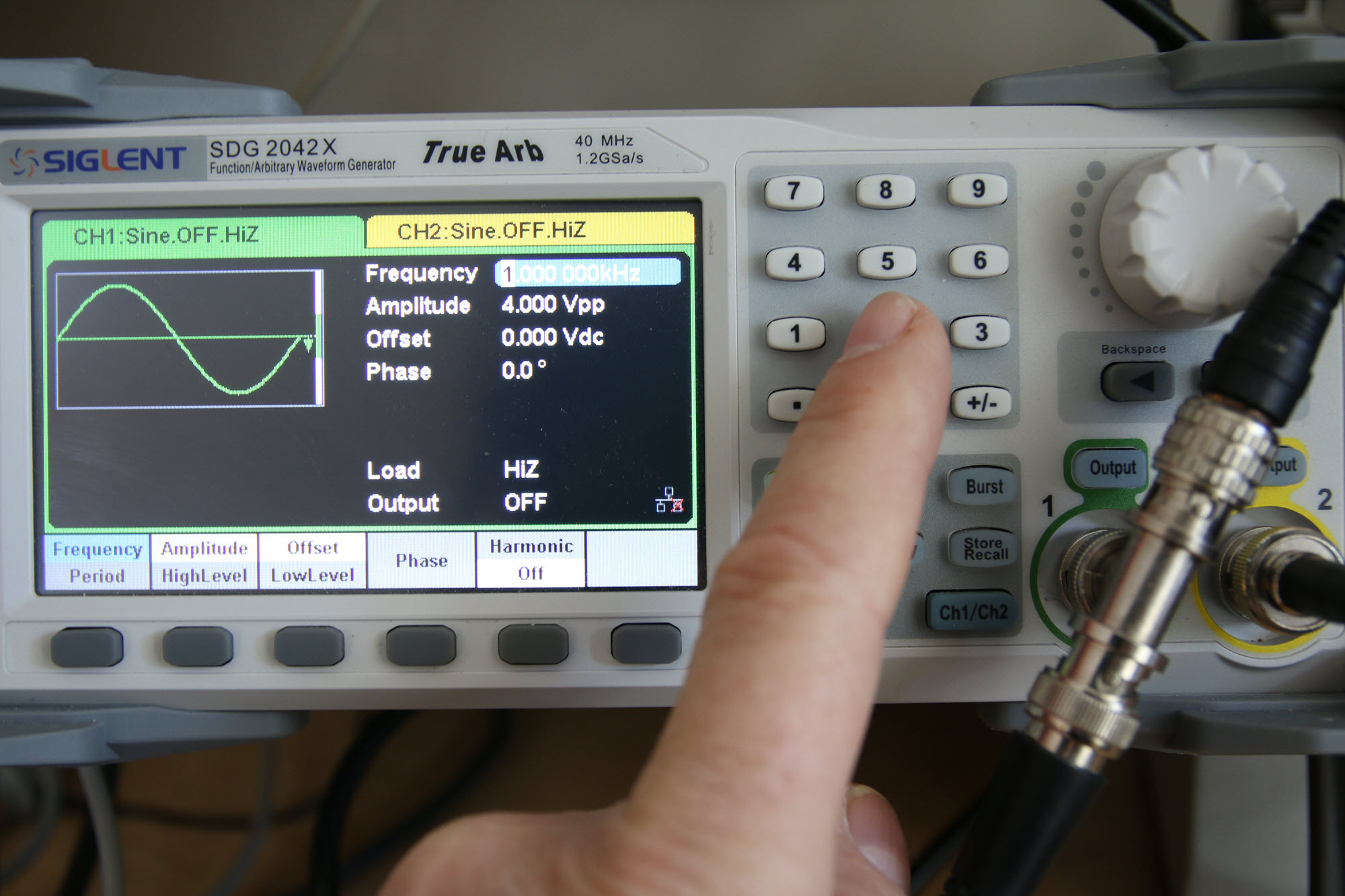 Even on this small SDG 2042X it's easy to hit the right button. The unit has a touch screen that I never use.

In the olden days when we wanted to get a screen shot of a scope we'd swing a large, ponderous Polaroid camera in front of the CRT and take a picture. I recall the film being about a buck a shot, which would be almost $5 today. And the cameras cost thousands, back when thousands was a lot of money. Today those problems are long gone. My scope can be networked. but somehow I've never gotten around to doing that. I capture the screen to a USB stick and move that to the PC. It's easy, but admittedly a little bit cumbersome. You really can't beat a USB instrument for the ease of capturing data to disk.

Those on a budget would do well to get a USB instrument. But I advise those learning about electronics with a goal of getting employment in the field to buy a standalone unit, because these are the most common in real-world labs. That sea of knobs can be intimidating at first and it's important that scope operation is as second nature as using a fork. Some of the Chinese vendors sell pretty decent gear for a few hundred dollars (assuming you don't need tons of bandwidth). Older, and perfectly serviceable, equipment is available on eBay for very reasonable prices - as are USB versions. For those aspiring to careers in this field, I do recommend getting a digital scope because a good understanding of sampling rates and the like is important.