I'm just back from the first-ever Embedded Systems Conference in Bangalore, India, heart of that country's high-tech industry. I was astonished that the conference program attracted nearly as many participants as this year's fifteenth running of the Boston ESC. Has the embedded market matured such that strong turnouts at an inaugural show should be expected? Or has the growing embedded community in India been underserved by these sorts of events?

Several luminaries convened the conference with short addresses, including the Minister of IT, more or less analogous to a cabinet secretary in the US. except we have no cabinet-level representation of IT, technology, or science. He, like pretty much everyone else in the world, is clearly clueless about embedded systems, but did make the effort to fly across the country and interact with the growing firmware community. That's more than we can say for national-level recognition of embedded in the US. When I told Ben Cardin, then a Maryland Congressman, that I was in the embedded industry he gave me a blank stare. He courts IT professionals (uh, voters) of course, yet 50 times more processors get sold into embedded apps each year than into the rest of the computer industry. Though only the poorest on this planet are untouched by our work, we remain a stealth industry here and abroad. 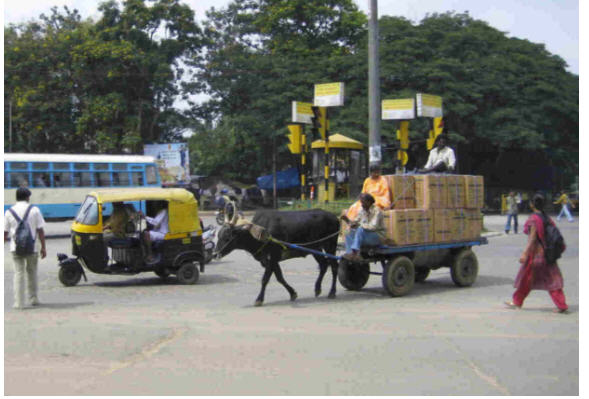 Microprocessor technology hasn't quite made it into some of the vehicles.

In chatting with attendees at the Indian show I repeatedly heard people apologize for their "small" firmware groups, but on further probing found these were often teams of 400, 600, and more. While small compared to the armies of IT people employed by the Tatas and Wipros, those numbers are gigantic by Western standards.

The developers I talked to were all engaged in state-of-the-art development projects. Mesh networking. Ultra-low power designs. Talks on multicore processors, for instance, were standing room only, complemented by the Core 2 Duo exhibits at Intel's booth. Attendees were doing more than gathering information as several discussed current multicore projects that are in development now.

Show management speculated that attendance exceeded expectations since Indian professionals believe in securing every educational opportunity available. Couple that with the passion for embedded work that so many expressed to me, the number of small entrepreneurial startups I ran into, and one can't help wonder just how far this nation will go.